(This post is part of my Frosty Festivities Blog Event)

Do you ever re-make a layout? I had used this photo on a layout a couple of years ago, but I was never that happy with it - I'd put another photo on the same layout which had clashing colours, and the whole thing looked a bit chaotic. I liked the photo so much that I decided to re-do the layout, and I love the new, cleaner version:

Don't you think my daughter looks like a little elf? 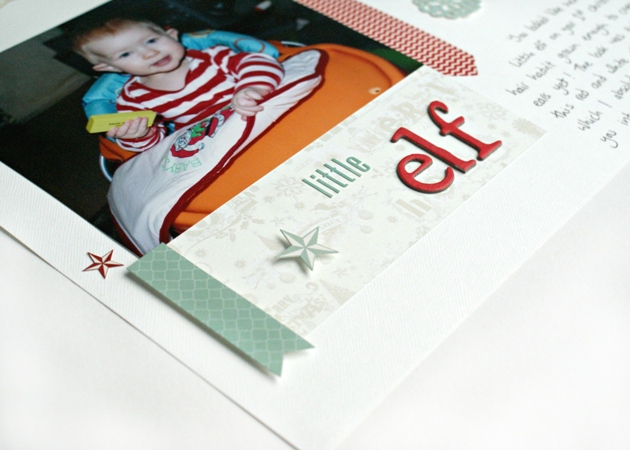 I experimented with a different way to make a snowflake effect on this layout, after listening to this paperclipping roundtable episode. On it, one of the panellists (I think it was Wilna Furstenberg), mentioned putting a layer of mod podge onto her background and scattering glitter on.

So I tried the technique out, using the confetti-type negatives from the Martha Stewart Vintage Doily punched shapes as well as glitter: 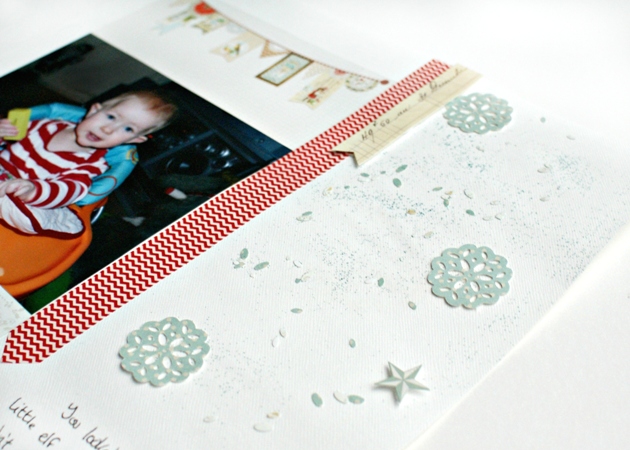 It make the page buckle a little, but the effect is so pretty that I didn't mind!

Don't forget that a comment on this post, or on any of my posts from this weekend, will count as an entry into the Grand Giveaway {NOW CLOSED} - but only if you've registered your interest in winning that here!

Have you tried any new techniques out lately? And if so, were you happy with the results?

Cute page - I have a few that I SHOULD redo but never get around to it - maybe now is the time!

I don't think I ever have redone an older page (though several got redone during the actual making!!) I do have a few that I'd quite like to do over, plus a few that I'm happy to keep as representative of my style at that time, even though they wouldn't look anything like that if I made them now....

This looks fab, I love the snowy effect! (And I didn't spot any buckling till you mentioned it!)

She makes an adorable elf!
I normally wait until an album is finished & then go over it to tart up, or re-do any pages I'm no longer keen on.

aaaah bless she really DOES look like a little elf doesn't she? I've remade a couple of layouts and have one or two more which I intend to make over - they just annoy me every time I look at them usually because the colours aren't right - there are some which are just not my style any more but I can live with those! :o)

The page is gorgeous...love the snow effect.
I've never re-done an old page as I feel they represent where I was with scrapbooking at the time....though I have gone back and added more journaling [as I did very little when I first stared scrapbooking].
I have occasionally scrapped the same photo twice.

Very cute page and an adorable little elf!
I've so many photos still to scrap that I won't be taking time to re-do any existing ones! Though, like Mel, I do a lot of re-doing when I doing the actual doing IYKWIM - good job my glue is re-positionable!

Oooh I love that doily punch! And yes she does look elfin-like! I have redone a couple but I think I would never stop doing them again as I'm never really happy with them!

Love the picture :-) I have been looking at redoing my first ever LO (it is so bare) and may try some new techniques on it.

i can't recall ever re-doing a page, those snowflakes look good x

Your daughter is a real cutie!
I do have one layout I want to redo. It is of my granddaughter at our allotment. It was a magical moment and the page does not do it credit. I have bought new background paper so it is on my list of things to do.

Love how crisp and clean this layout is, and your daughter is just adorable!

Love your snowflakes...love flakes although I only like snow through a window!! LOL
I have never redone a layout....I think if you look back at LO's you did a few years ago you would always do them different...but that was the style at the time!!! LOL

I love your layout-fab punched doilies and adorable pic!

She is very cute, and very elf-like! Love using those confetti pieces left over from punches.

It is totally not a new technique, but I sewed on a layout today for the first time in many years! I used to sew lots, then just couldn't be bothered to get my machine out. :)

I have been adding different types of banners and trying to add jewels randomly and in different random sizes...not so easy to do when you are never random.

Cute page...love the little banner at the top

I am always second guessing. I could do 10 times more if I didn't overthink it so much. My downfall, I know.

How cute! I've been in a bit of a slump lately but I'm going to try out that confetti technique of yours. This whole event is very inspiring!

Such a cute photo! Lovely LO.

Yes, I can see the elf-resemblance! Love the idea of using the washi as a banner.

your daughter is definitely an elf!! love the effect of the glitter and confetti!!

I have quite a few pages I would like to remake when I have the time!!

What a cute page! I love that little string of bunting and the washi tape strips are fun.
But it's the gorgeous baby photo that really makes it so special - he's adorable!

Not a new technique so much as a new toy - washi tape! They've only really come onto the market here in South Africa recently and it's amazing what you can do with them little gems :)

Love that Martha punch you are using. On my wishlist from your postings :)

LOVE the Washi tape arrow. Another technique noted in my notebook.