Does anyone else feel like the more crafting they do, the more they want to do? I thought that doing Shimelle's LSNED class would get annoying, trying to keep up with making a page each day. But instead it's just a good excuse to go to my craft desk, then once I've finished the page for the day I start on something else, which leads to ideas for more things = never ending crafting! I did no creating last night as I had a headache and went to bed at about 8.15pm, and I woke up this morning feeling a bit wierd, like my fingers missed making stuff! (Don't worry, I made up for it today!)

First I need to show you the page I made for the Fiskarettes monday challenge this week - to create a project using paint or mists. Here's my finished layout (click to enlarge): 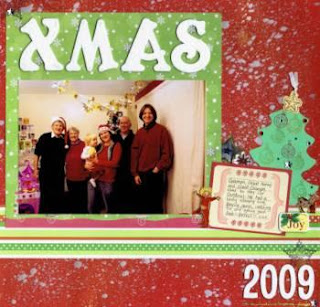 You can see my post on the Fiskarette's blog here if you want more details on how I put it together.

Me and my little girl did go out to Corfe Castle with our friend Rosie on Wednesday afternoon, but I couldn't afford to pay to go into the castle itself. So we went for a walk instead, and spontaneously decided to try and get to the top of one of the hills which overlook the castle. Did we choose the hill with steps and a clearly marked path to the top? Of course not! We scrambled up a steep track on the other hill, climbing past gorse and blackberry bushes to reach a great view from the top: 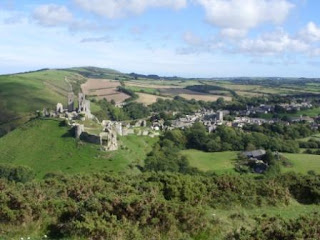 Little one wasn't as impressed with the view as she was with the abundance of rabbit droppings though! Every step she took she said 'oh, more rabbit poo!'. But I loved seeing the castle from a different angle. And I chose the walk as my lesson for the day (click to enlarge): 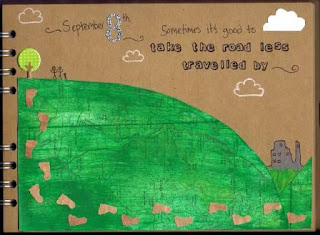 I took my inspiration for the journaling from the Robert Frost poem about going the less travelled route, as though other people do walk up this hill it's less popular than the other walks around because it's that little bit more difficult - and that makes it feel more like an adventure! Though it was also a little bit scary coming back down on the steep, slippery slope (okay, it wasn't that steep, but I'm a wuss when it comes to walking down big hills, I always worry that I'll slip and roll/slide the rest of the way down). You can probably see that I used old map paper to make the hills, I painted them with green acrylic paint and then while it was still wet I wiped some of it off with a baby wipe so the map could be seen through. I like the effect, I'll have to use it again.

Finally, I made a card today for my Grampa, who turns 80 tomorrow: 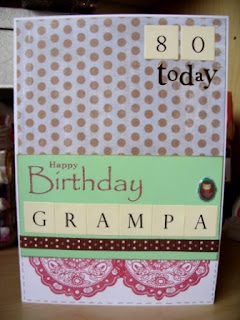 I hope he gets it in the morning, I mailed it first class so fingers crossed. We're going to a birthday party tomorrow, but not his - he's not having one. It's one of my daughter's friends who's turning 2. We're hoping for good weather as it's supposed to be a garden party!

Have a great weekend! xx
Tweet
Pin It
Posted by Unknown at 20:32

Great LO!!! Love how you did the tree ornaments. Love the lesson LO, the stick people are a fabulous touch.

Awesome web site, I had not noticed jennifersjumbles.blogspot.com before during my searches!
Keep up the excellent work!

Congrats on the Fiskars position!

AND - I am LOVING your LDNED doodled album pages!!! Mega lovely!!!

Fab creativity :-) I'm really going to try for an early night tonight - yours is the last blog I'm visiting, just need to make the kids' packed lunches and drink a cuppa then I'll be settling down - unless anything else distracts me, of course....

I love Corfe Castle :-) I also love the poem you quoted, I made a layout with it on a while ago! Great page xx

(Oh, and happy birthday to your Grampa!)

Ha, good to see I am not the only one catching up with Christmas layouts. Love yours girl!
The LSNED mini is looking great too, I wish I would of signed up now!

how amazing to have a castle to walk to! and how funny that your little girl was more "impressed" by rabbit droppings! so delightful! great journal page and LO