The End of the Weekend, but Not the End of Organisation!

So here we are, for the final post of the weekend. I have one last tip for you, and a request for feedback. But first of all, I want to give you a few links to the weekend's highlights. I won't include all the posts, as there have been 34 in total (including this one!) - if you do ever want to re-visit the others, they are all tagged with an 'organisation celebration' label, which can be found in my right sidebar.

For now I want to point out my favourites, in case you missed any of them:

The Giveaways are now CLOSED! Thanks to everyone who entered. The winners will be announced on Thursday 5th July!

There's two challenges:
Here's the tutorials, and a sketch:
Finally, here's a link to my favourite organisational tip post:
Phew, and that's just the half of them!

Here's one last organisational tip for you. Okay, it's 2 tips really (the second part is further down):

If organisation fails, just do it really really quickly.

If I hadn't have put this to use, some of these posts would not have appeared this weekend! I was as ready as I thought I'd be, as hubby has been out a lot this week, so I had to spend more time sorting out the kids and housework, and less time blogging. But it all worked out in the end.

I also put this phrase to use last weekend, for mine and my sister's birthday party. I had wanted to make some bunting for a backdrop, to drape behind a photo booth we set up. I hadn't got this done before we left - we were camping at the party venue all weekend. So I took the material and scissors with me, and cut the fringe bunting up on the grass: 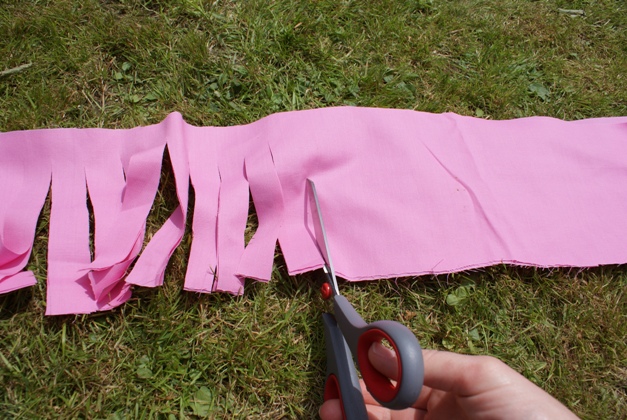 And half an hour after I'd started, it was being put to use: 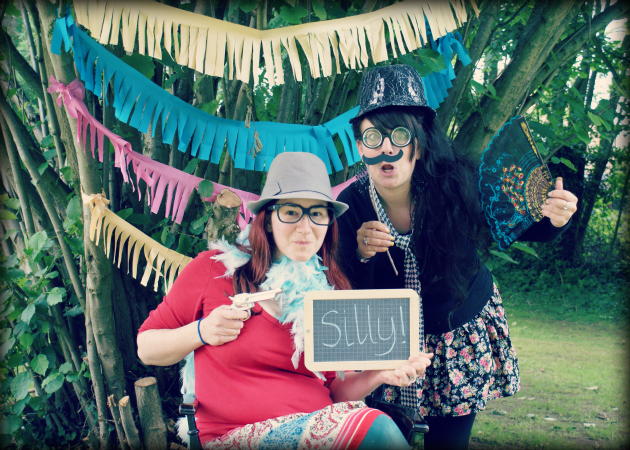 The second part of the tip is:

Don't get upset if you don't manage to organise something - it will be okay!

I had other plans for things for the party last weekend, and for this event this weekend. I often have grand plans for things to organise around my house. These things don't always work out - but that's okay. You just do what you can and try to stay relaxed, and life will work out fine!

So there we go. That's all for this weekend! I hope you've really enjoyed it - I have, although I'm quite tired now!

I'd really love it if you can give me some feedback in the comments.

This is the first weekend blog event I've ever run, and I want to know what you think! Constructive criticism will come in handy. For example:
Or anything else you can think of!

I'm tentatively thinking of hosting another weekend like this towards the end of November, on a 'Winter' theme. It would include a few Christmas related things, like gifts you could make for people, but it would also just be winter themed projects and recipes etc. What do you think? Would you come back? Would you tell other people about it?

If you like the idea so much that you'd like to be involved in the next one, for example by sponsoring a giveaway, or being part of the blog hop, then contact me at jennifer grace (at) hotmail (dot) co (dot) uk.

Thanks again so much to everyone who's stopped by this weekend, I hope to see you again at Jennifer's Jumbles!

I loved it! I thought the topics were spot on...the length was perfect...great amount of information, inspiration and excitement!

I thought your topics were knowledgeable and thoughtful! They made me think about organization and gave some great tips! Great job!

I have loved the whole weekend....your posts have been great....lots of food for thought...and for a procrastinator like me.....short time deadlines are definately better!!
I'm already looking forward to a winter themed weekend.

thank you so much for the fabulous tutorials, the tips and ideas you gave us! you did a fantastic job and I really appreciate the weekend! I am definitely going to pop in to your blog often! I learned so much!

I've really enjoyed reading through all your organization weekend posts. I think you did a fantastic job - I especially like how you focused on scrapbooking, yet you included other organization tips (toys, cleaning, etc) along the way to break it up. Great job!! I'd definitely come back for an event in November.

Thanks so much Jennifer for this weekend. I thoroughly enjoyed it. You used your theme to perfection. Everything was good. I would be thrilled to be invited to your next one and I would definitely blog it. If given enough time to think it out, I would be willing to be a part of the bloghop if you would have me! But please, please let me know the theme wayyy ahead of time-I'm not fully organized yet:)

I was really looked forward to each of your blog posts...great topic that is close to my heart, so I really enjoyed it.

I had a lot of fun reading all these posts! I think it was a good amount, it really didn't take me too long to catch up when I had time, and there was something new every time I checked! Plus there were a lot of great tips, the giveaways look awesome, and I'm going to try to enter at least one of the challenges! I will definitely bookmark your blog and come back often, and I'll be on the lookout for info about your next event like this, because I might like to participate! Thank you for organizing (hahaha!) this!

I had such a fun weekend reading your posts. I will admit I would read them in chunks. So, I was gone for several hours and come back and read and comment on several posts. I am glad I was a follower prior to this, or I would have no idea about your fun event! :) Thanks for giving something fun this weekend, I loved it!

It was fun! I loved all of the organization posts!

I love all the posts. I learnt a very useful organization tips this few days. Thank you so much!

I think you did brilliantly! I came across your blog for the first time on Friday through Miss Smith's site which I already follow, and I'll definitely be following yours now. I think the timing, frequency, content and everything else was pitched just right - well done! I would certainly "show up" if you did something similar in November. :)

thanks for sharing so much with us!! i think it was a perfect mix between personal post, DIYs, challenges and blog hops!

thanks for sharing all the fun links! lots of reading to do today!!

I just started reading, so I will have to get back to you. But it seems like a fun weekend with lots of good info. :)

This post could have been written just for me.
I have just spent 2 hours cleaning and reorganizing my craft room, boy have I thrown out some stuff.
Then when I finally logged on I found your comment on my new scrapping blog inviting me to join in the fun here.
That's what I call serendipity!

Hi Jennifer! I love your blog and really like the organizational tips you shared. I wish I would have found your blog sooner so I'd have time to play along with all the weekend events but I'm a new follower so I won't miss out next time ;D. I'd love to participate in a blog hop :D Take Care!!

Oh & thanks so much for visiting me on my blog!

I am loving those banners! SO CUTE!

Aaack I just spent ages writing a reply here and then blogger lost the window! Anyway the gist was that I think you achieved an amazing feat this weekend I am totally in awe of all the effort and planning that must have gone into it. I think you got the perfect balance of tutorial, tips, challenges and giveaways. Thanks for a fantastic weekend event! :)

I think you've done brilliantly this weekend. A great mix of posts, challenges, tips and give-aways. Awesome!!
I reckon you could have managed with fewer posts - we'd still have been more than happy - especially around the blog hop time when we were gallivanting off elsewhere.

this must have taken some organisation Jennifer. You done well. Enjoyed all the posts. A christmas one sounds like a plan x

I thought it was great - lots of interest and ideas. Really enjoyed it all.

I've enjoy everything, some post were realy useful for me, tutorials and tips are much apreciated...
But I can't read every post by the deadline of the giveaway, so maybe a day more for the next time will be better.. (for me)

The blog hop was so fun!!

I like a lot the giveaways, there's no many international giveaways so I want to say thanks for think in all your readers
Kisses from México, and thanks a lot for your kindness

I browsed thru some of the topics and they were awesome! Thanks so much for stopping by my blog!!

I had a fab time this weekend thank you - I got so excited waiting for the next post each time and I think you had a good balance of ideas, projects, challenges and goodies. I would definitely be up for another one in November and would be happy to spread the news. Well done and thanks for all your hard work and enthusiasm. Annie x

I think you did a fantastic job! It's obvious that you put a lot of thought and work into this weekend. There was a lot of content to read, but that's okay. I kept up as best as I could and will come back again to check out anything that I missed at the time. Thanks for all the great info you provided and for introducing me to other great blogs.

Oh, I can definitely use some organizing help. I will definitely be back to check out the previous posts!

Thank you so much for all the tips! Some of them I already incorporate and others are ideas I need to think more about doing. I think I spend more time organizing than creating sometimes!
HAH!

what a great photo!!! soooo funny!

I really enjoyed it, I learned a lot, I'd definitely join in again. I'm still processing all the inspiration. I think a Winter themed one would work really well. I liked the amount of posts but the deadline might need to be a little longer, especially for those where something else needed to be done if that makes sense. Otherwise it cuts down the number of people that can join in. HTH.