(I'm going to admit that this post may not interest you if you don't have kids, unless you want to have a nose around my living room and my kiddies toys!)

Right now, it's bedtime for the little ones in this household. I'm probably thinking 'thank goodness', and my front room probably looks a bit like this: 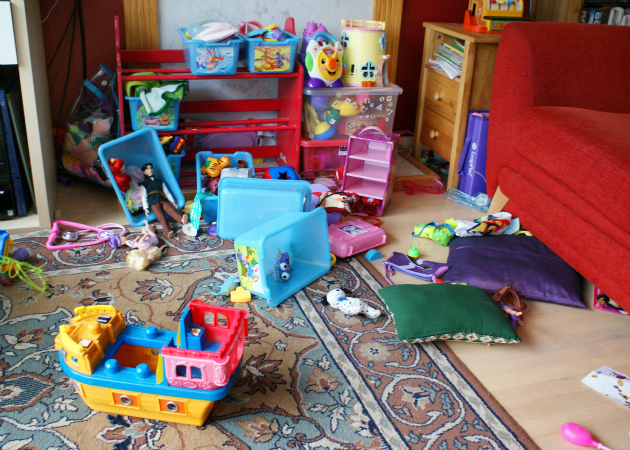 But that's okay, because I know with my highly organised system, it will only take five minutes to get it looking like this: 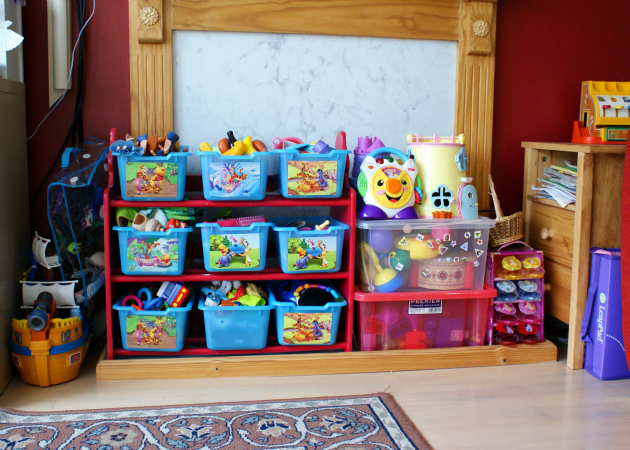 Everything in its place! The Winnie-the-Pooh drawers all have certain things that go in them:

The top tier is one drawer of dolls, and two of playfood: The next level has toys from 'In the Night Garden' in one box, 'grown'up' role play toys (like handbags and hairbrushes!) in another, and doctor's items in the last: 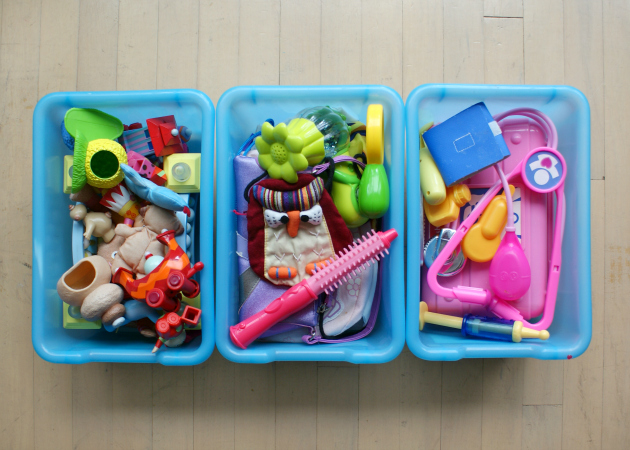 The bottom level has two boxes of baby toys, and one full of toy animals (and a few little people): 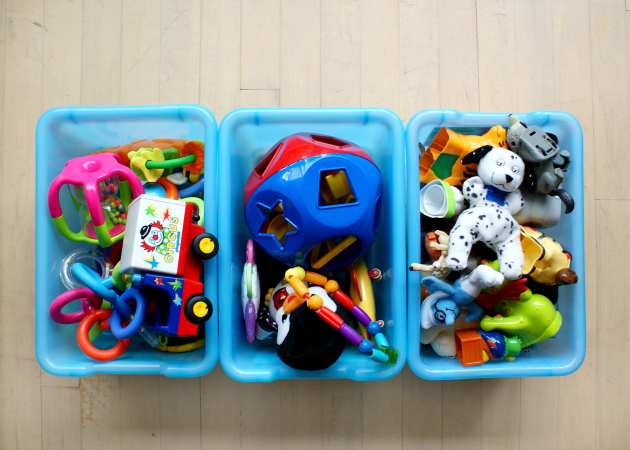 The other boxes next to the drawers are organised too - mega blocks in the pink box, with accessories that go with the blocks, and musical instruments in the white box (which has a clip on lid that can't come off until Mummy says it's okay!)

Now, I'll admit I've been using this system for longer than this year, but I'm including it in this weekend because I have learned something about it in 2012 to go with my word for the year. The key to keeping the toys all organised is to train everyone else to tidy it away the same!

For a long time when it was hubby or little miss's turn to do the tidying, then everything was just shoved haphazardly into the boxes, which then wouldn't fit onto the shelves, or would be turned upside down sooner to try and find a certain toy.

Now, hubby puts them away the same as me (well, almost as neatly - he tries!), and me and my little girl have competitions to tidy the toys away. I say that I'll tidy the animals, if she does the dollies, and we race to see who can fill their box first! It works a treat. Now the toys can be quickly packed away in the evening, and I can relax and enjoy the living room after they've gone to bed!

Do you have certain things that have to be organised into compartments to keep it all organised? Do you get annoyed if anyone messes up your system?

Don't forget that a comment on this post, or on any of my posts from this weekend, will count as an entry into the Grand Giveaway {NOW CLOSED}- but only if you've registered your interest in winning that here!

I hope you enjoyed a peek into the toy drawers! I'll be back in an hour with another giveaway! x

Looks like a great way to keep it all together and having the family help is always a plus!

System?...what system? I'm usually filing by piling... but every so often tidy it ALL away. Then I proceed tostack it up again.

Wow!! Your toy storage system is fabulous!! When my daughter was younger we used to have boxes and tubs in the lounge and everything just got piled in, now she's a little older she is encouraged to keep most of her toys in her bedroom and to keep it tidy ... let's just say we're getting there!!

We have a similar system except that we have a playroom that I don't like to tidy too often! They get things out and make scenes etc and I don't have the heart to tidy it away (until I trip over it or get PMT!!)

I'm impressed. I'm so happy that my children have reached an age where they keep their toys in their own rooms. Although, I admit I don't tidy up as often now I can't see the mess all the time

Wow, now that's a system. When my kids were smaller, it was more hassle to get them to pick up. Now with grandsons, same ol same ol!

What a great system for organisation, really could do with that lol!

I used to have something similar when mine were small. Not as organised as yours though!

Wow! that IS impressive - one of my pet hates is when someone messes up my cutlery drawer (I even scrapped about it once!)

I always like the IDEA of this kind of system; the one place I actually have it working for me is my craft room - I know where everything goes there, and it usually goes back!

I don't have kids (yet!) but I'm taking notes furiously on brilliant ideas like this one. :)

Great idea! I always make a big pile on my desk/floor and then tidy from this one! It makes everything around look nice and tidy, and just the pile needs to be sorted!

I have tried the everything has its place thing and even labled everything it worked a bit when they were younger but now only works if I put things away. My boys are older now and still never put anything in the right places, infact I find socks and underwear and empty food wrappers and spoons in their drawers and they are not even allowed to eat in their rooms! Totally does my head in so I now have to leave it otherwise I spend my life reorganising their whole rooms lol

This is true organisation!!!!

I don't really have a system at the moment. In my dorm room, I had a tall set of shelves that I had organized into categories, but even then, I switched things around a lot!

I really really hope my kids room looks like this once... just once, just for a photo maybe =( to have a memory LOL
sra_de_romero(at)yahoo.com.mx

fortunately I don't have to keep toys tidy anymore-my kiddos are grown-but it looks like you have a great system!

Seeing this reminds me of my lounge when my kids were little......now it seems to get full of school books. Your system looks great.

We don't have children, but we do have quite a few little guests at time. We have two bins on the game shelf near our living room that hold toys, so they are easy to pull out for kids to play with, then everything goes back in those two bins & back on the shelf very quickly.

My children are older and so, thankfully, I no longer have to put away toys. But I have a small tools and hardware drawer that I organized and get annoyed when the guys "borrow" my stuff and then forget to give it back. I have threatened to put a lock on it!