Earlier tonight I spoke about how I've organised my scrapbooking by choosing my favourite three manufacturers. There's a couple of other things I've been doing too (more on these further on in the post). All together they've brought about such a change, that I decided it warranted a scrapbook page about scrapbooking, which isn't something I make very often!: 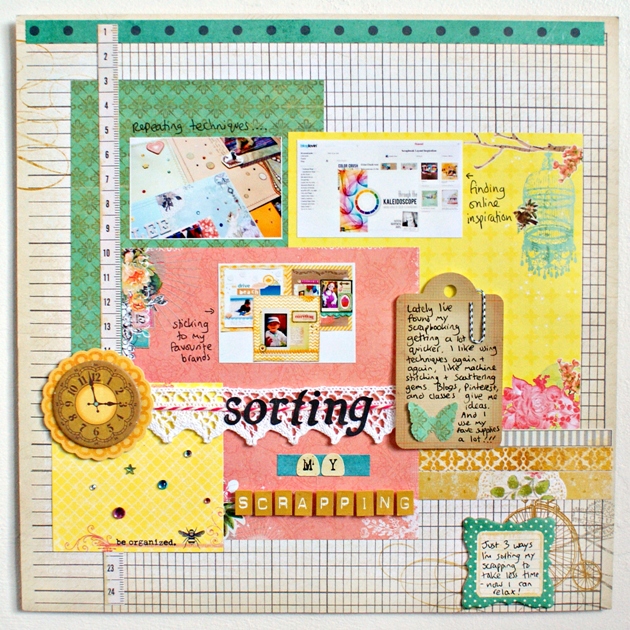 The supplies are, of course, mainly from my three favourite suppliers: Crate Paper, My Mind's Eye, and Pink Paislee. 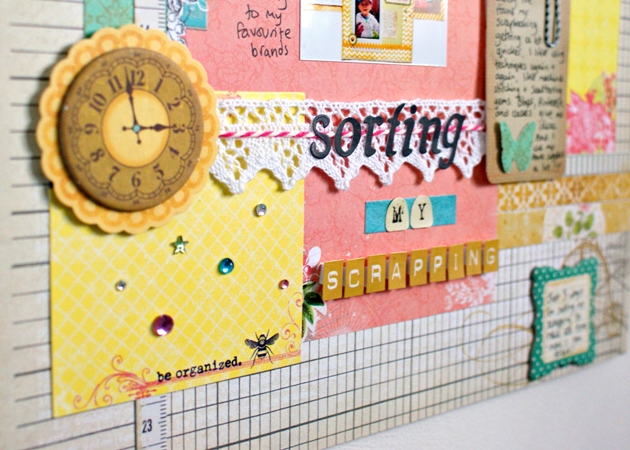 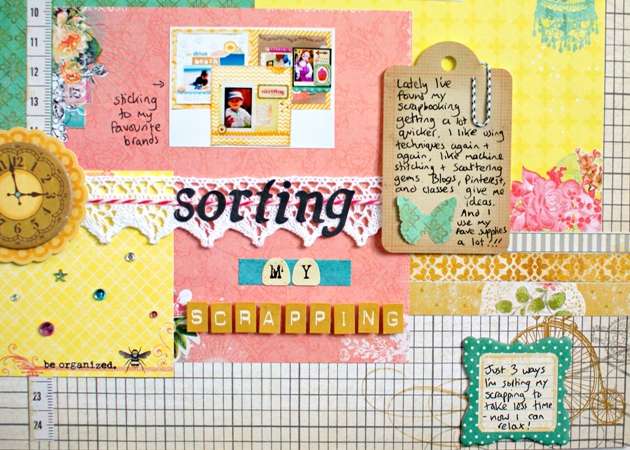 The page documents not only how I've been sticking to these brands a lot, but also the fact that I've been repeating techniques, and finding inspiration online.

I've seen the idea to repeat techniques, or scraplift yourself, a few times on the internet. SJ of Little Musings posts a series called 'Take One' where she takes one element from an old layout, and repeats it on a new one, and Sophie Crespy has used several things from an old layout on a new one in this post for the Scrapbook Circle blog. I've often wondered whether my pages had a recognisable style, and though I liked most pages that I made, I did think it would be nice to have a bit more cohesion in my albums.

I made the decision to try and use machine stitching and paint on more layouts, as they were techniques I already liked for the mixed-media look. And then after I created this layout for a prompt at www.shimelle.com, I discovered how much I liked scattering gems on my pages, which has featured on an awful lot of them since (and this even prompted Sarah to try out the technique too - see here!): 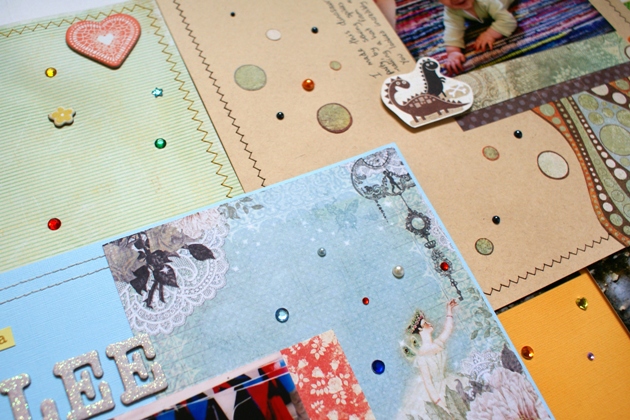 Using scattered gems a lot has made my scrapping so much faster, as I know what techniques I can use to finish the page off, without having to think about it for ages. It also keeps my desk more organised, as I don't tip out all kinds of packets and boxes searching for the perfect embellishment - I just reach for gems, that sit within reach!

I used several features from my word-of-the-year page, plus the scattered gems technique, to put together the 'sorting my scrapping' page really quickly.

I've also been organising by taking inspiration from online. One way is from online classes - I've taken classes before this year, but in 2012 I've been making a concious effort to use them for immediate inspiration - I've been printing out the prompts and sticking them up on my wall. It worked well for 'Through the Kaleidoscope' by Amy Heller, which I reviewed here, but not so well for 'Cover to Cover' by Shimelle Laine - mainly just because I need to buy an album or two before I can really sort my pages out. I'm determined to do this by the end of the year though!

The other ways I've been finding inspiration online is by reading blogs, and then pinning things I like to Pinterest. I find Pinterest so useful for this, as I always used to see projects I liked, but then forget all about them by the time I came to make anything. Now I can go and browse my pins when I want some ideas. I posted some layouts I wanted to scraplift here, all pinned to my pinterest board, and I've used a few different techniques from them on layouts, such as using the 'tags on a line' idea from Stacey Cohen's layout, to make my 'You 2 are Lovely' layout on this post. Having Pinterest to take a quick look at when I need an idea is a way to get me scrapping quicker, as it takes me to long to think otherwise. Of course, this is assuming I don't get distracted by all the other goodies on Pinterest!

Do you use any of these ideas to help you to scrap faster?

Don't forget that commenting on this post, or any post from this weekend, will enter you into the Grand Giveaway {NOW CLOSED}- but only if you've registered your interest in winning it here.

That's all for tonight - I'll see you tomorrow morning at 10am BST for a very organised day! x

I scrap faster by making page kits. . . works great for me. Plus, sketches!
rinda

I am being educated tonight, Thank you;0)

Excellent post! I love to scraplift myself. :) With a boy and a girl, it goes so much faster that way!

Thanks for the great ideas today! :)

I also like reading blogs, and sometimes pinning things to Pinterest. I find sketches and scraplifting also help me scrap faster, too. :)

I love how you've identified the things that work for you. great page, too.

Great page! Although I don't belong to Pinterest, I do save images of layouts that I like on my computer so I can look at them for inspiration.

Carrying elements over gives a cohesiveness. Have you tried using one element, such as a pattern, throughout several pages?

i love the scattered gem idea.

I've really got into sketches and scraplifting this year - speeds things up, gets your mojo going and uses up the stash I already have piled high in my workroom. Must try and get my head around the Pinterest thing - it looks intriguing. Right I've caught up now - I'm off to look at your first post today only 6 minutes late! Very exciting :)

I do tend to do a few things over in layouts. I love stitching and inking edges on layouts but I don't think anything could make me scrap faster, I am too indecisive. I have tried a couple of classes a few years ago but I never seem to have the time these days.

I like using sketches! I mostly make cards, but I haven't been doing this craft long enough to really be good at coming up with my own designs yet! So sketches really move things along.

After Shimelle's class...I'm determined to sort my pages properly as well.
I find using sketches speeds me up....and having a page kit....though there's usually enough in it for about 4 pages.

I use kits, and sketches, and I will often just store embellishments with matching papers if I know I will use them together. I like the idea you mentioned of taking something from one layout and using it on another. That is something I should do more often.

I love Pinterest for inspiration! Love the pages you have done too!

Oh I learned a lot... I think this post must be saved on my fave's =)
thanks

Sketches and kits work for me too. I love Pinterest but have been avoiding it so far because I already spend far too much time online....think I may have to give it another go now.

I love my kits for speeding up my scrapping! Great page!

I love sketches - these probably help me scrap the most. I do find that I go through a phase of stitching on everything, or using twine or butterflies or gems on a number of layouts at a time. BUT I don't want these to be consecutive pages in my albums. I like an album to have variety once it's complete.

I am very organized when it comes to sketches and layout ideas...I print and put them all in recipe card file boxes ( I was gifted with three such long metal boxes). They are sorted by the number of photos on them and also by one or two-page layout. Once I have picked the photos for a layout, I go there to find the layout inspirations listed under that number of photos...easy peasy. To achieve cohesiveness in my (chronological) albums, I choose three or four coordinating colours and embellishments and use them exclusively in the whole album. In essence, I shop my stash and make a huge kit...for the whole album, not just for a page or series of pages. Works great!

I make kits and use sketches - but also I've made an inspiration file at home from all the old mags I was keeping. I cut out anything I liked and glued it to copy paper with a note of what I liked. These all went into a file and then I did a summary page listing all the things that I am drawn to in others work - it was a long list but with repeating themes. I use this file to scraplift or to remind myself to try a technique