My nan has had a lot of nicknames. I think it's definitely something about her generation that they haven't always been called by the names they were born with. I had to create a layout about this as I think it's fascinating, I know a lot of people have nicknames when they're at school etc, but it's wierd to think of being called by a different name almost your whole life. Here's the layout (click photo to enlarge, scroll down this post for journaling): 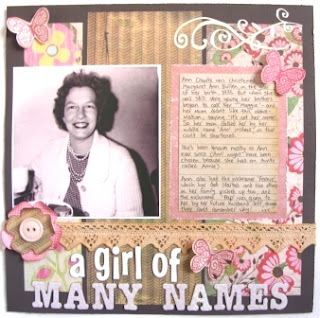 Journaling reads:
'Ann Crawte was christened Margaret Ann Bullen, in the year of her birth, 1935. But when she was still very young her brothers began to call her 'Maggie' - and her mum didn't like this abbreviation, saying 'it's not her name'. So her mum called her by her middle name 'Ann' instead, as that can't be shortened.
She's been known mostly as Ann ever since ('Ann' might have been chosen because she had an Auntie called Annie).
Ann also had the nickname 'Feenie', which her dad started and the other's in her family picked up too; and the nickname 'Pap' was given to her by her future husband Jeff, though they can't remember why! xxx'
I have many stories about my grandparents so they'll be some more layouts of them!
I had a good time this weekend with Rosie, running the creative writing course for kids. It was very tiring too though!
Everyone made up a character to be on the Saturday, when we went exploring. They all had a bit of costume to help remind them of their character, and to encourage them to think about how their character would feel in the setting or situation we were in. Of course me and Rosie had a character too, we wouldn't ask the kids to do anything we're afraid of doing! My character was Agatha Cotton, a wandering storyteller. Here I am in my costume on the walk across the Mendip hills in Somerset: 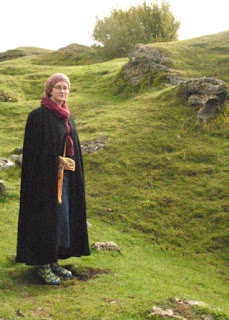 And here's some of the fantasy worlds the kids made from junk and mod-rock, to base their stories in. It's a great way to make them think big when imagining settings for their stories, and to give them a visual stimulus for their descriptions: 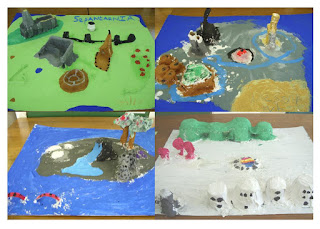 What fun! I love the layout about your grandmother! Thanks for sharing with us!

This is spooky, I know of another Ann Bullen! She works in a local school. It's not a common name so that is a real coincidence.
I think that you are right - that generation were notorious for using different names. My mum was from a family of six children and two of my uncles were always known as 'Nunny' and 'Om'. I never did find out what their real names were!

What a great subject for a page, it really made for some interesting reading today. And I think I can see a family resemblance there :)

Love the layout about your grandmothers names, it is interesting and the sort of thing that should be remembered.

The creative writing sounds fab, this is something that is really interesting me at the moment as I really want to engage my 9yr old boy in getting creative and writing his ideas down.

Your layout is great, and I love the story behind it!

This is a great idea for a page. My BIL comes from a family where the first born males are all given the same first name but called their middle name!

What a great picture of your Grandmother! I love what you journaled. One day, I'm sure your'e daughter will love having this layout!!

Great layout Jennifer - beautiful elements and love the story concept, too.
Sounds and looks like you had a great weekend - love those fantasy worlds - always love looking at this kind of art by kids.
Thanks so much for your comment on my blog - love your idea for the Configuration box!

Great layout Jen, I had a Nanny Beer (because that was her surname - not beacause of alcohol!)and I never did find out her real name! I must ask my mum!

I love your layout :0)
And just wanted to say thanks for stopping by my blog.
Kate xx

beautiful layout of your grandmother!