flower brooch on a bday card!

This week it was my friend Rosie's birthday, and I was inspired by a couple of blogs when creating her card. Firstly the fabulous SJ had a tutorial for prima style fabric flowers (see her post here), and I had to try it straight away. My mother-in-law had given me a huge piece of thin lilac fabric which used to be her net curtains, and which I knew was not the right colour to ever be curtains in my house, so I started cutting it up without fear! I ruined a couple of my first circles by burning them too much, but after a few attempts and a bit of stiching I managed to make this: 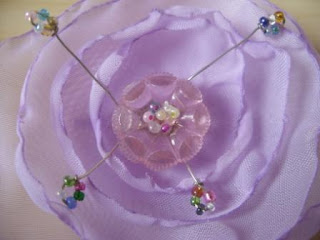 I didn't have anything to use for flower stamens like SJ did, so after a bit of pondering I made my own out of some wire and seed beads. If you want to make some of your own here's how it goes:

First cut a short length of wire, mine was gauge 24, and thread about 5 seed beads on the end: 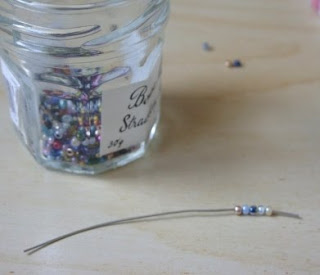 Then curl the end of the wire back towards itself: 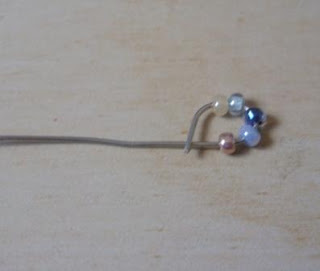 And wrap it around a couple of times so the seed beads are secure: 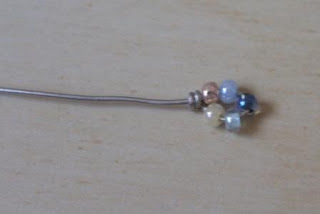 I then just wrapped the other end of the wire around between my button and my fabric (which had already been sewn together), making sure it went around a few times and pulled tight so it wouldn't undo. If you have a glue gun you could probably glue the wire to make it extra secure. I also wrapped the wire around different amounts so that the resulting stamen were not all exactly the same length: 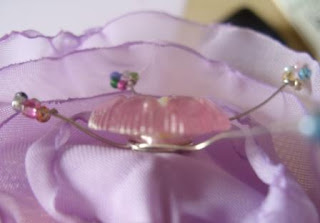 I also used clear gloss to glue some seed beads into the centre of my button so it matched the stamen and so you can't see the thread anymore.

When sewing my button onto the fabric I also sewed it to a brooch back, so that the flower can be worn (in the image here the brooch back has been taped to a piece of card so that I could attach it to Rosie's b'day card): 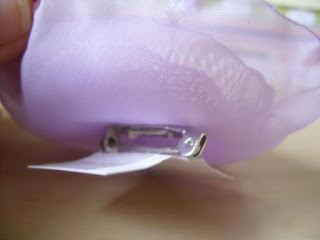 Once I was happy with the flower's result and knew I wanted to give it to my friend, I decided the best way to gift it to her would be as part of her card. I searched for a sketch for inspiration, and SJ's blog came up trumps again, as she directed me to the Fiskarettes forum, and a sketch challenge here. They ask you to come up with a project following the sketch, for the chance to win a subscription to a craft magazine (the competition is open until Monday 12th if you want to give it a go!); the sketch looked fab and I thought I could place the flower brooch in the big rounded rectangle. Here's the sketch: 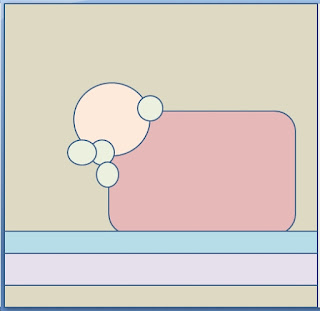 And my finished card: 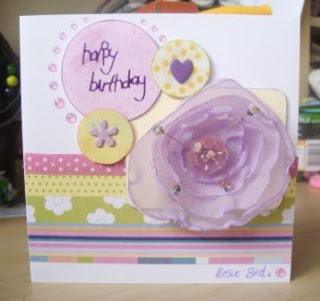 The circles are scraps of paper that I inked the edge of, pierced a brad through two of them, and then mounted onto foam dots. I then edged the largest circle with Papermania 'pale pink shimmer dots' which look really pretty but are a pain to work with, as they're impossible to pick up with tweezers like I do with adhesive gems! The pink polka dot line is a stip of ribbon, which I adore and am using sparingly on projects as I don't want it to run out! Finally I attached the flower brooch to the card by taping it to a strip of card and then slotting it into two slits on my foam mounted rectangle of cream card: 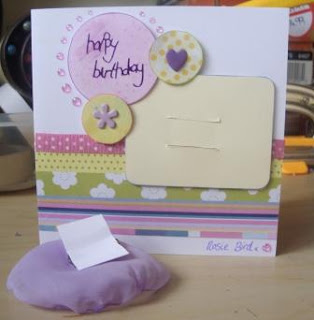 I was really happy with the card and I think Rosie really liked it too - I've seen her wearing the brooch twice already since tuesday so I think it's appreciated!

I'm off now to enjoy some sunshine. By the way Debs - I haven't ignored your request for the choc muffins recipe - I shall try to upload it over the weekend!

x
Tweet
Pin It
Posted by Jennifer Grace at 11:17

A card that is also a present: how cool is that?! It's so pretty, no wonder she loves it.

SJ was actually taking the class at the crop I went to last weekend so I have seen the flower close up! So pretty, and how clever. Not sure that I am brave enough to try it myself, I can visualise melted fabric and blistered fingers! Yours looks so pretty, and what a good idea to make it part of the layout of the card.

That is so pretty Jen, it looks great on the card and makes a lovely gift too.