It was my husband's birthday on Wednesday, so I made lots of bits and pieces. Here's the quadruple chocolate cake I made for him, with a racing car made from royal icing on top: 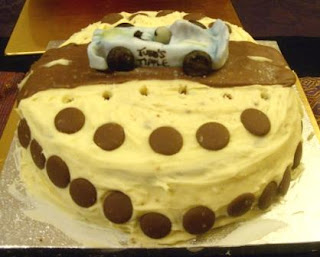 Some bunting which has images of racing cars, choc cake, chinese food and cards on it, as these were the theme of the evening! I got all the images off clipart, printed them out, and then made the bunting from paper to stick them onto: I got this frame from a charity shop, printed the photo of hubby and daughter, and then got daughter to do a drawing of them together to put next to it. This was her present for him. Of course, she told him about it before his birthday, when we'd just made it. 'I've got a picture for your present Daddy' she said. Too cute! 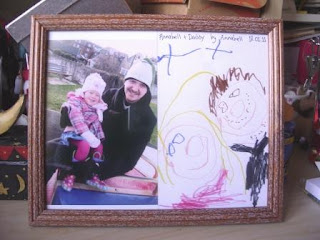 Here's some fingerless gloves I crocheted for him, I had started them for a Christmas present, but only just finished them on tuesday! 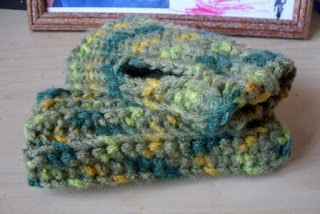 The cards we made him. My daughter's one started out as a spaceship and a racing car, but she told him it was a river, a bridge, and him. So it's a transforming card! 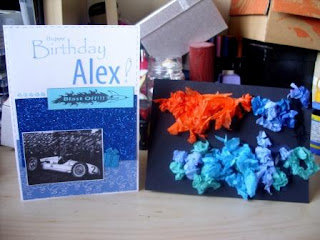 Finally, I made him some mince pies, as I had promised to make some of these at Christmas and never got round to it. He loves mince pies! 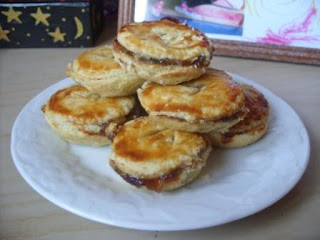 And here he is, enjoying his evening playing scalextric, his xmas pressie from me, which he has had lots of fun with: 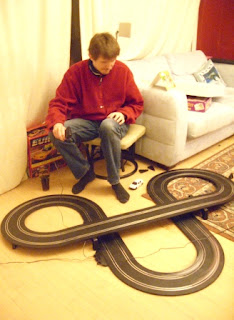 I think he enjoyed his day and liked all the things I made!

Hope you have a good weekend! xx
Tweet
Pin It
Posted by Unknown at 20:55

I should hope he IS happy - you went to a huge amount of effort to do nice things for him! Heart-warming. :)

Oh I'm so hungry and that cake looks so GOOD!!! Love the gift from your daughter. Such a great idea!!! I think I'm going to have to do that with my kids.

Sounds like he must have had a super time :-)

Love that your little girl gave the game away lol - reminds me of when The Boy (age 3) was helping me make a cake for The Doctor's birthday. He shouted up the stairs, 'Don't come down, Daddy, we're making a cake. It's a surprise!'