I know it isn't Sunday, but I wanted to wait until my daughter started school to share my story this month. So I'm joining in now with the lovely bloggers that have shared stories at Sian's blog - you can see her post for September here.

Waiting until the end of the week meant that I could show you these photos of Little Miss, posing for a photo shoot before she went to school on her first day yesterday. I have a lot more photos from the shoot - she loves to pose right now - as long as I let her take some silly photos as well as the smiley ones: 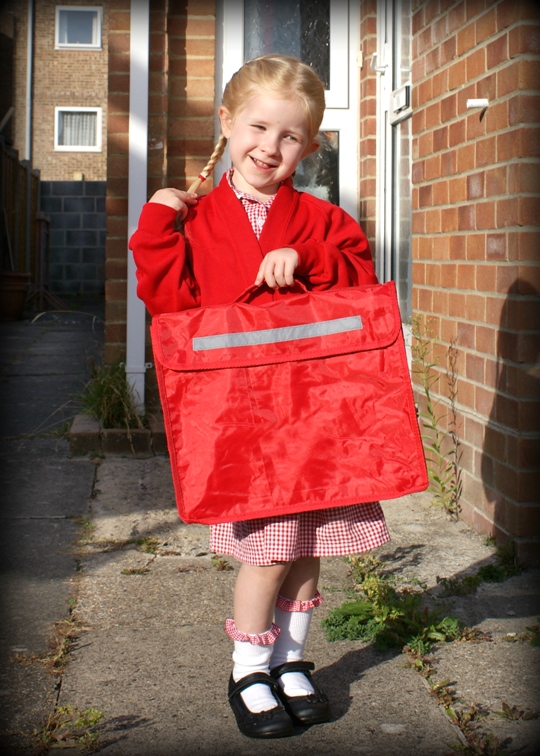 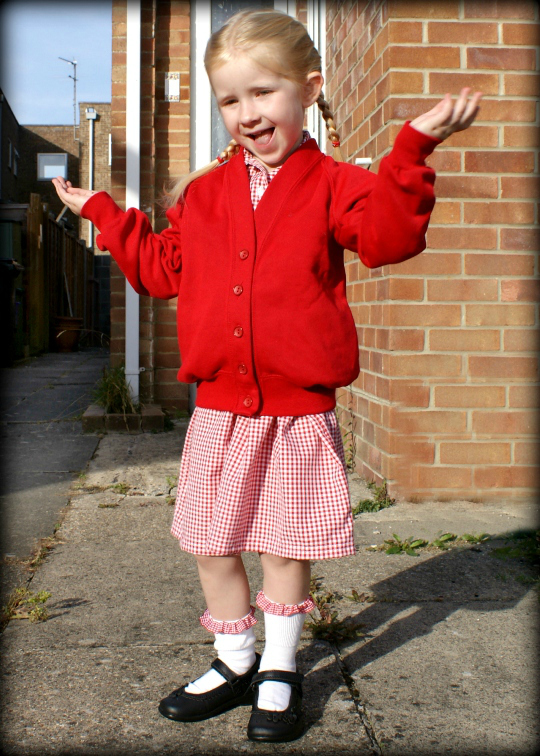 She had a great first day. Her biggest worry before school was how she was going to play with her two best friends both at the same time - she knew one from nursery, and one from play-group, but they both started school with her. I explained that they could all play together, but she said "but who gets to be in the middle?" I think there's been enough other friends around that it hasn't been too much of a problem so far!

She was certainly a lot more confident than I was on my first day...

I was clasping on to my mum's hand as she led me in to the classroom, which seemed so big, but crowded because of all the children inside. Most were milling around an art table. My mum pulled me over and talked to another little girl, called Stephanie. She had bunches (two pigtails) in her hair - I only had one ponytail. I wanted bunches.

"Time for me to go now" said mum, and I started to cry, begging her not to leave. She stayed as long as she could, but the teacher must have ushered her out. I noticed. I waited. When the teacher's back was turned, I ran.

Out of the classroom, out of the school building, everything blurry through my teary eyes. There were no mums left around, as far as I can remember. I didn't care, I just wanted to get home to my mum. I ran out of the big school gates, and halfway down the road (on the pavement), and finally caught up with mum, grabbing onto her skirt and bursting into tears all over again.

You can imagine that mum hugged me and told me off, then marched me back into school, and gave the teacher a piece of her mind for letting a four year old run out of the school on her own. I don't remember, all I recall is desperately not wanting to be there, and wishing mum would take me home. I sulked most of that day.

But Stephanie was nice to me. As were others. And eventually I settled in. I never ran out of school again, though sometimes I wanted to - my school years were not always enjoyable. Like the day when I wet my knickers and had to wear a pair of BOYS ghost-buster pants all day long. I hated that! But I loved bits too, especially the actual lessons - I loved to learn. And though I don't have a photo from my first day at school, I have lots of others, and I'm very smiley in them: 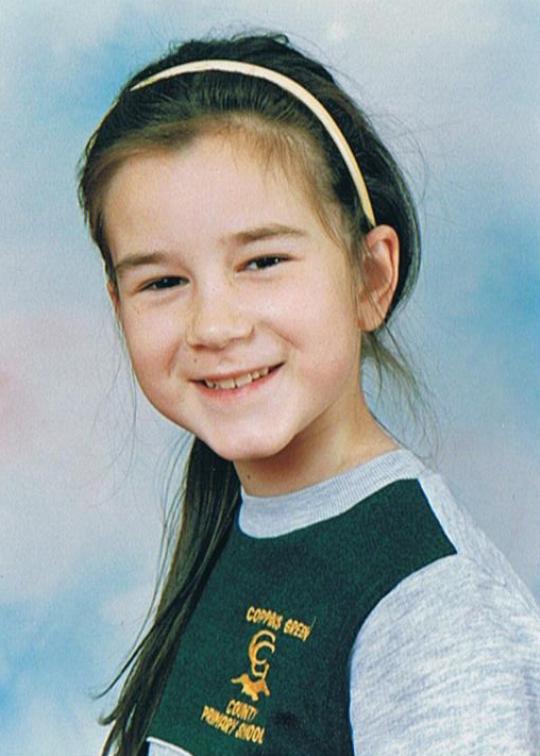 Sian has mentioned a couple of times that my daughter's smile is the same as mine, but I'd never really seen it until I found this photo of me!

I hope that Little Miss continues to enjoy school, and always has the problem of too many friends! x

Jennifer,
Your daughter is beautiful! I love her socks, too. And thanks for sharing your story. I don't have strong memories about my first day. I was the third kid off to school which was only a five minute walk from home, but I think my mom dropped me off.
Rinda

What a funny story of the runaway! Quite a brave move to pull on the first day. I can see lots of similarities between your daughter and you.

I can't remember my first day at school.....but i have the local newpaper cutting to prove i was there lol! It was good to hear that you soon settled into school life! x

Love those socks and the plaits/braids - I used to wear my hair like that for school too. Made me smile :)

So glad she had a good first day and has worked out how to play with more than one friend at a time!

Great story and I'm not surprised that your Mum gave a pieces of her mind to the teacher....

Cute photos of Little Miss - love her bright and cheery uniform. Loved your tale of first day blues too. TFS

I can just imagine how cross your mum would have been to find you had 'escaped'! Thankfully, school security is much better nowadays. Your daughter looks so much like you, and so cute in her uniform. Hope she continues to enjoy herself.

Doesn't she look gorgeous and so smart in her red outfit! Big milestones huh?

Oh yes! That smile is definitely there in all its loveliness.

I think Friday is the perfect day to post this story and mark the end of the school week. A perfect way to record a big moment all round :) Best of luck to her in her lovely uniform for the rest of the year!

Your LIttle Miss looks so happy...glad she had such a good week! Your story was great too...I ran away once, but I don't think it was the first day
Alison xx

What a lovely story. Its these moments in our lives that transport us back to when we were children. Your daughter looks very happy on her first day:)

I can't even imagine being brave enough to defy authority and run out of the school building! Great story. Little Miss is adorable.

Well, I am glad for both your sakes that she was less mobile on her first day than her Mom. And I don't blame her for wanting to be in the middle - seems like the best place to be when you are all in red!!