My Ten Things this month had to include photos from Disneyland Paris, where we spent last weekend! 'Ten Things on the Tenth' is led by the wonderful Shimelle Laine - though today I see her post has been hijacked by the also fabulous SJ!

Here are 10 Magical Moments from our time at Disneyland Paris
(photos are roughly in order of when they were taken):

1. Seeing the books I made for me and the kids getting filled up with drawings, stories, and autographs. Even baby boy enjoyed doodling in his book - he loves to use crayons right now (and only occasionally tries to eat one!): 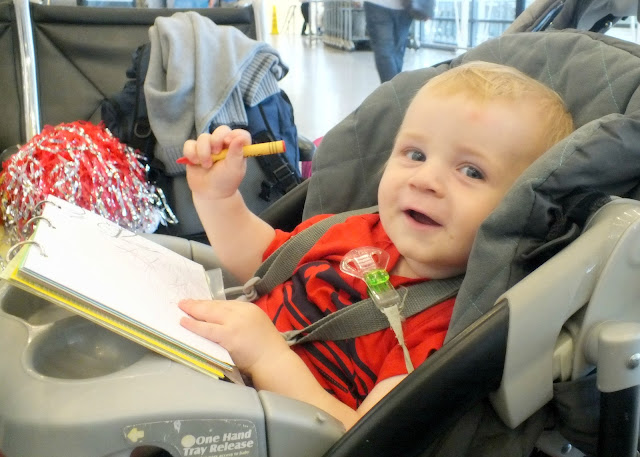 2. Going on 'It's a Small World' as our first ride, and watching the girls's reaction (my daughter and my niece). They were amazed: 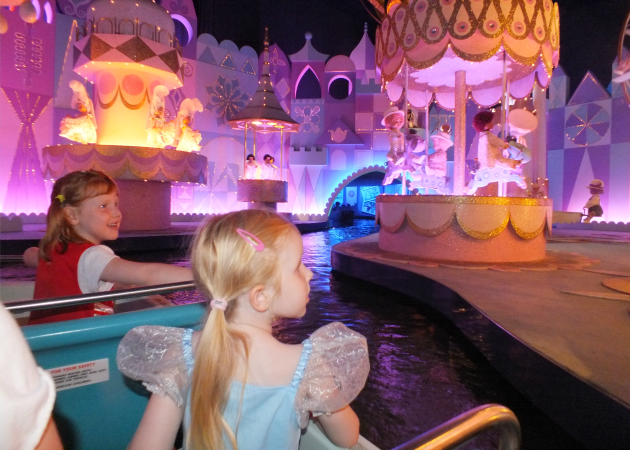 3. Baby Boy's reaction to the illuminated parade, he kept pointing and smiling at each float as it passed by, though some of the loud music worried him a bit. This is the Aladdin float: 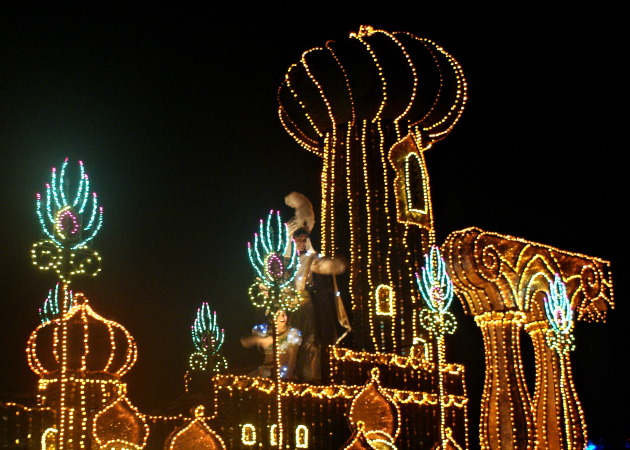 4. This was my personal favourite, the Disney Dreams spectacular when the park closes - a special event they're doing for their 20th anniversary. This photo doesn't do it justice, but it was a light / water / music / movies / fireworks show, with pictures projected onto the castle. It had a story about Peter Pan's shadow escaping and travelling through lots of the Disney Movies, and the lights and pictures transformed the castle into a waterfall, and Notre Dame, giant rockets, Asian ruins, and more (there's a video on You Tube of it here if you want to see more). I was gobsmacked at the whole thing, so much that it made me cry with joy to see it: 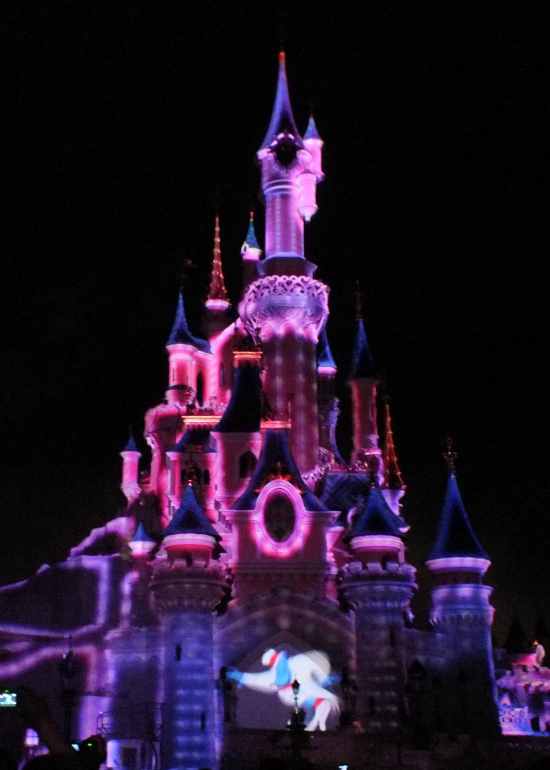 5. Appreciating time with family - we went with my Mum and Stepdad, my Brother and his Wife and Kids, my Sister, and her Boyfriend came for one night. The first picture was taken on our second morning, the next photo was taken on our third afternoon just before my sister's boyfriend had to return home. It was so lovely spending all this time together, my family are wonderful! (And yes, baby boy is asleep in both pictures!): 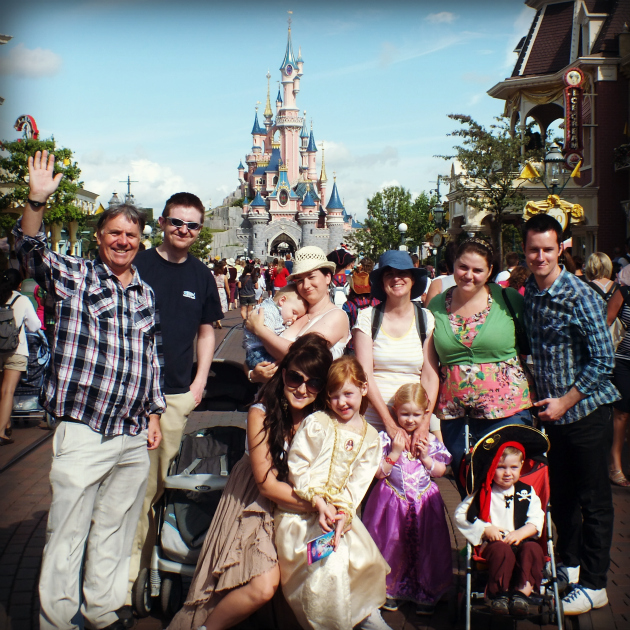 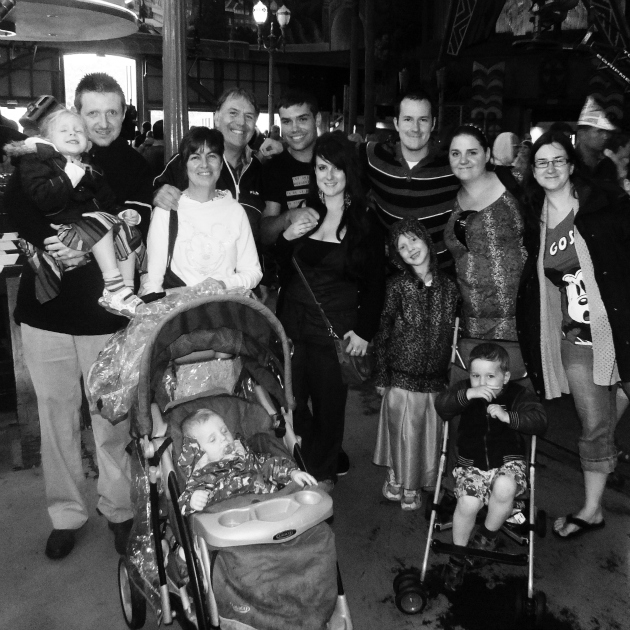 6. Realising how fearless my little girl can be sometimes - she's definitely not afraid of heights based on the Parachute Ride in Toyland in the Disney Studios Park. The 'parachutes' take you straight up into the air, and then let you down, not super fast, but not really gently either - it makes your stomach jump! Hubby was more worried than little miss though - she loved it, and said 'again again' as soon as we stepped off: 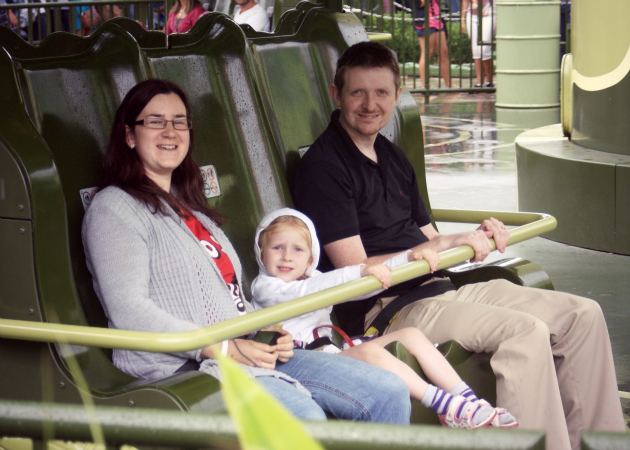 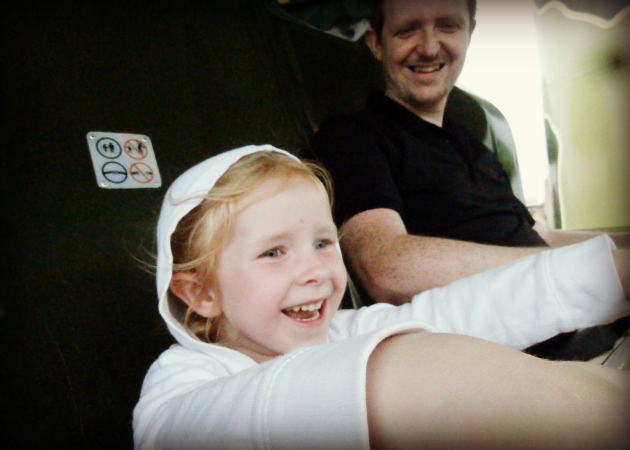 7. Seeing Ariel! After being Ariel for my 30th Birthday, I couldn;t wait to see her, and we finally saw her properly at a parade on our last evening. I waved at her like I was a little kid myself! And then I smugly thought that my costume was better, hee hee! 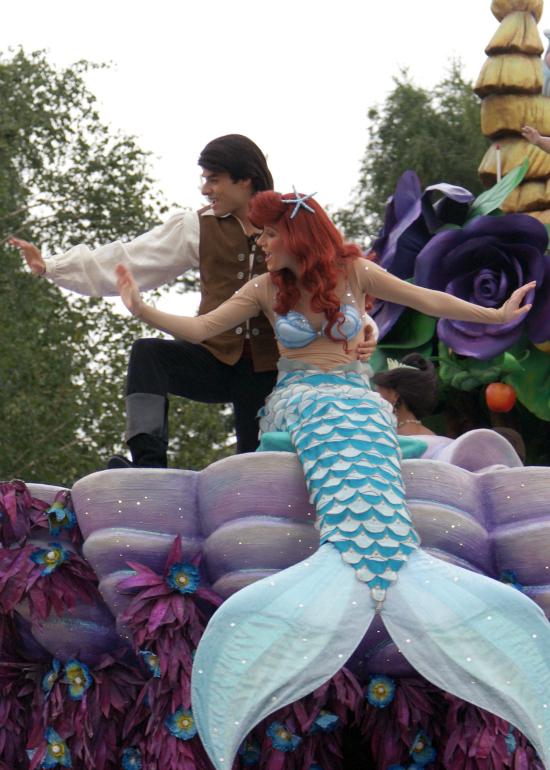 8. My daughter and my nephew holding hands. This was the first time my nephew has been old enough and bold enough to play properly with my daughter, and they were getting on so well together, chasing each other around and chatting about things. The heart melting moment was when they walked along together after breakfast on our last day holding hands, so sweetly: 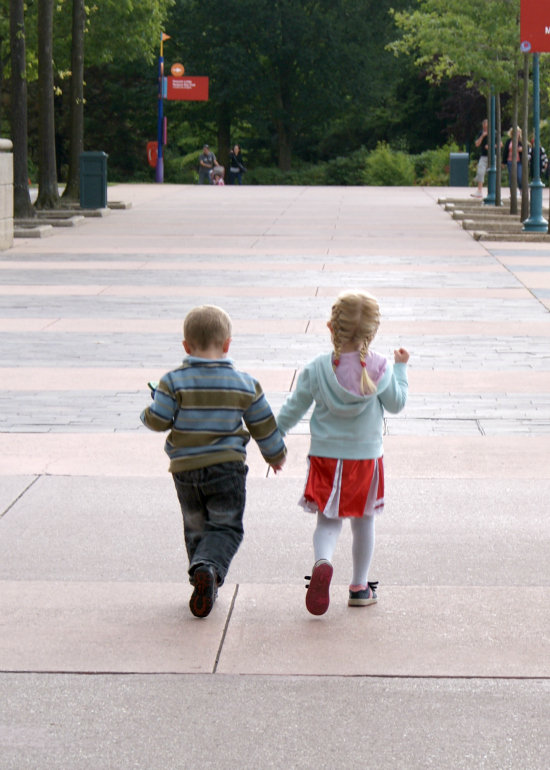 9. Looking at the little details. One of the things I like about Disneyland is all the extra details they put in so you really feel like you're in another place, like the queue lines that always have things to look at. But I still miss lots that you walk past quickly - not so for my daughter, who kept pointing things out. My favourite was when we were on our way to meet the princesses, and she said, 'I think we'll meet Rapunzel, because there's a Golden Flower up there', and pointed up to the top of a tower, where there was a flower just like the one drawn in the Tangled film. We didn't meet Rapunzel, but we did glimpse her later so it was okay: 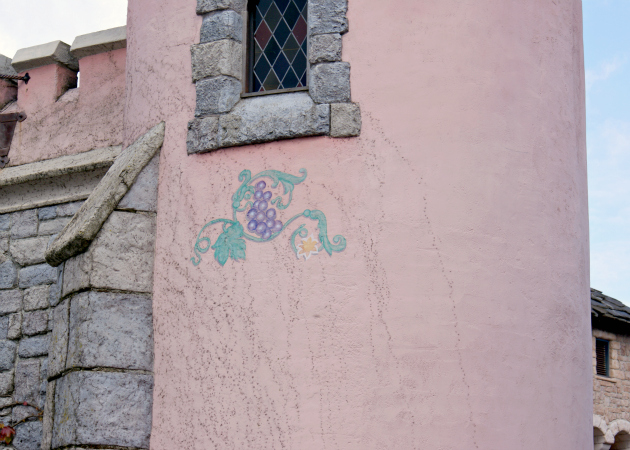 10. Meeting characters. We met Goofy, and Pluto, and Mickey and Minnie, and Snow White, plus a few more. The kids loved meeting them and getting their autographs, it was sweet to see their expressions when they spotted another character, though my daughter was a bit shy of some of them, and baby boy cried at a couple of the larger ones!: 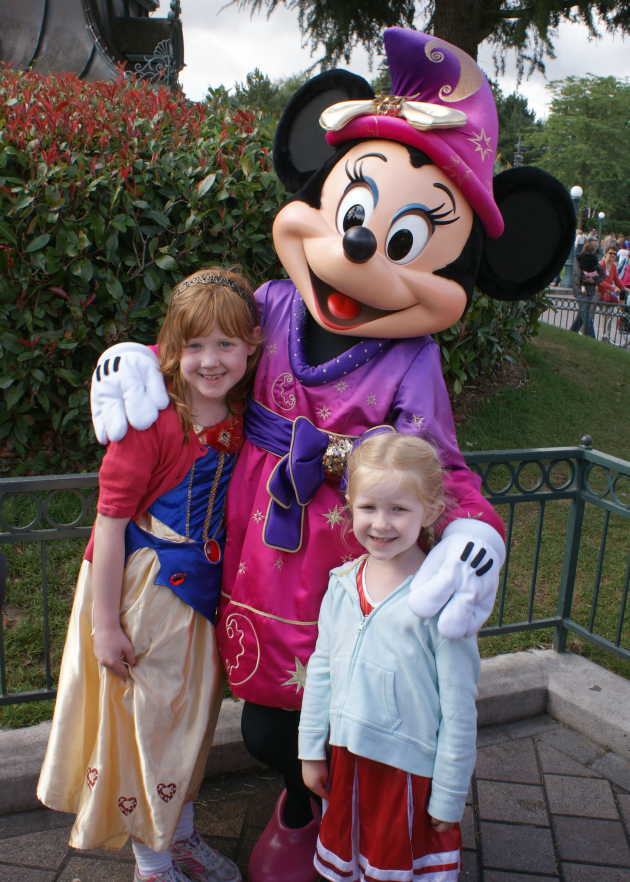 We had such a wonderful, though tiring, time! I hope we get to go again someday, when baby boy will be old enough to appreciate it more. Even though he won't remember much from this trip I know he enjoyed it, and we'll be able to tell him all about it, show him the many scrapbooks that I'm sure I'll create, and know that we've made moments to treasure for all our lives: 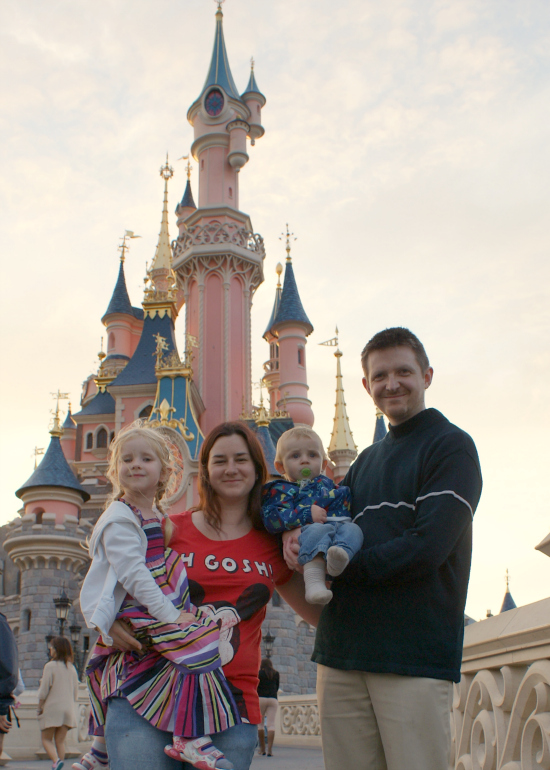 I love the photo of your daughter and nephew holding hands. It looks like you guys had a nice time.

Forgot to mention I came over from Shimelle's blog.

What a fantastic post! This really captures the wonder and joy of your visit, as well as the love that is so obviously a part of your family.
Rinda

Oh Disneyland, how i love you! You cannot but help getting caught up in the magic!

It looks as though you had a wonderful time!

Brilliant photos Jennifer, looks like you all had an amazing time x

Fiona@staring at the sea said...

What a lovely post, it really captures the pure joy of your visit :o)

Thanks for stopping by and the lovely comment... It's much appreciated.

Pictures 1 and 8 are my especial favouirites - wonderfully snapped! Glad you all had such an amazing weekend together. :)

It looks like you and your family had a great time. One of my favorite childhood memories includes meeting Pluto. The Little Mermaid wasn't out yet, so I didn't get to meet Ariel. I would still LOVE that! :)

Fantastic. It makes me want to go again

We love Disneyland Paris..it was lovely seeing it through your eyes today!
Alison xx

Looks like a magical time, I didn't get around to doing my ten this time.

Hooray indeed!!! Love the photos of the 2 toddlers and you 4 in front of the castle. A great ten was had by all!!!

Love all the memories here. I clicked over and have to agree, your Ariel costume wins! Ah, I miss Disney now..

I can't wait to go with our 2 at some point! You've certainly captured some great memories there.

Love all the memories here. I clicked over and have to agree, your Ariel costume wins! Ah, I miss Disney now..