Storytelling Sunday - How we began

The first Sunday of each month sees bloggers from all over the world join Sian at From High in The Sky, to blog a story. Be it funny or sensible, happy or poignant, there are many tales to be shared. You can join in and tell a story of your own, or just sit back and be enveloped by the yarns of others!

It's our 4th Wedding anniversary this month, which means we've been together now for 12 years. So I thought I'd share with you the story of how I met my husband...

I was working in McDonalds, as a Supervisor. You can picture me in a maroon polo-neck t-shirt, wearing a blue badge with my name on, and several gold stars for knowing how to flip burgers and being polite to customers. My friend who also worked there (wearing a dark green t-shirt for general staff) told me about this guy that fancied her. The conversation:

My friend: "Do you want to come out tonight? There's this guy that really likes me, but I'm not that keen. Want to come, and keep me company so you can see him?"

Fast forward to later that night, all traces of colour-co-ordinating baseball caps are removed to reveal our glossy hair, though we do still smell faintly of gherkins. We walk into Tom Peppers, the main pub, with it's sticky tables and carpets from all the drinks that have been spilt, and a palpable sense of release in the air as everyone forgets about the day job, and takes advantage of the buy-one-drink-get-one-free offer.

I sip a Bacardi and Coke and follow my friend to the table where her mates are all sitting, and one guy stands out straight away, maybe because he's 6ft 4".

"That's him" my friend whispers.

Hmmm... wait a moment. This is maybe not the fairytale love at first sight story you were expecting?! But it's the truth! I was not attracted to my husband when we first met. Perhaps because I was kind-of seeing someone else.

The guy I was seeing was an idiot though. And as I became closer to my friend, started hanging out with her more, and therefore kept meeting the tall, cheeky guy that liked her too, me and him became friends. We lived near each other, so he'd walk me home after a night out, and he'd tell me the guy I was with didn't deserve me. That I deserved better.

And then one day, about 6 months later, we went out on a drive. I grew up in Essex, where one of the main forms of entertainment after the age of 17 is to go out for a drive, with the car crammed full of people, and my future hubby was a bit of a boy-racer. So I was squished in the back seat while we drove through the dark night (probably on the hunt for some food), and I couldn't stop staring at him. He was driving, so no chance of him catching me while I gazed at him!

The next night we kissed - I'm going to say 'under the moonlight' because that sounds much nicer than 'in the smoky corner of a busy pub'. And that was the beginning of a very happy romance: 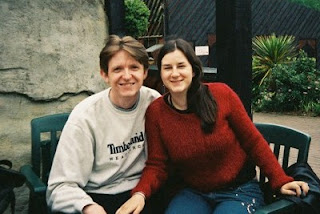 Thanks for reading, I hope you don't mind that it wasn't a romantic fairytale, but a tale of true love, none-the-less!

(P.S. conversations are possibly inaccurate. It was over 12 years ago. And you get the gist!)
Tweet
Pin It
Posted by Unknown at 22:59

lovely story congrats on your 4th wedding anniversary. I grew up in Essex too but have lived outside the county for longer than I lived in it now!

Happy Anniversary to you and your hubby! I wrote mine as hidden journaling on a page (hope you do make a page of it too!) and I totally relate about the love at.... second or third sight ;)

Thank you for visiting my blog! I enjoyed your story ... some similarities there to meeting my own DH ... including the B&C (well, my drink was a Bacardi & Diet Coke, lol). Were you able to get the free Kindle download? Hope so!

Aw, what a lovely story! (and what a cute picture of the pair of you). Happy Anniversary and here's to many, many more!

Thanks for giving me a smile with this one today Jennifer

Happy Anniversary!! You will find this hard to believe but my husband and I met while both working at McDonald's and I didn't fancy him at first either!!! Isn't it funny how you look back later and wonder why you didn't as you certainly do now :-)

Wookie & I went dutch on our first date to McDonalds - Essex boys know how to treat you ;)

True love is often unlike a fairy tale but is all the more precious for it.

Happy anniversary I can picture it now. And he is one cheeky guy!! He is lovely though.

Your story gave me such a chuckle and warmed my heart. So sweet. Great post. Happy anniversary!

Happy Anniversary. True love blossomed in the end so it is a fairytale!
I love a bit of romance to spice up a wet bank holiday weekend.

What a lovely story, and it is a fairytale as you are still happy together :)

As a fellow Essex Girl I can relate to your love story... we used to go out for lots of drives too! Petrol was cheap in those days and we would think nothing of driving miles to a nice pub or just for the ride. Congratulations on your anniversary!

Isn't it funny how familiarity can move you from "not much to look at" to "couldn't stop staring"? I, on the other hand, met my hubby in an elevator on the way to a job interview - he was wearing a blue pin stripe suit and it was his looks that got my attention!

What an awesome story! I think the best love stories start as stories of friendship.
Rinda

Love your story.
I wasn't interested in my "now hubby" when we first met, even though he said he was just waiting for me to break up with my then BF.
I too wrote a little story of hubby and I, I called it the "Real Love Story"
We always went cruising at that age as well, nothing else for a country girl to do ;)

This is a great story - I love reading about how couples first meet! It's often not the love at first sight perfect stories but the more everyday ones that are the sweetest!

Oh, congrats on your anniversary. And thanks for sharing the story - 4 years proves there was romance enough.

That is a lovely story, happy anniversary x