... some with help from a certain three-year-old!

I promised a post with a catch up of some of the things I've been creating the last couple of months. I haven't, shock horror, made a single scrapbook page. The urge deserted me for a while, but I have one in my mind now that I just need to find time to put together! Instead I've been art journaling / card making along with other bits and pieces. Here's a few things for you to see.

First up is an art journal spread I created about some of my pregnancy thoughts. I included a scan photo, and my daughter helped me out by printing a hand print onto the bottom right corner: 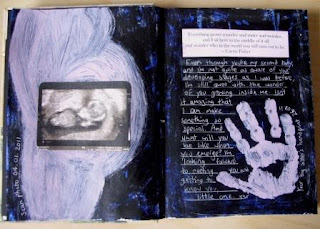 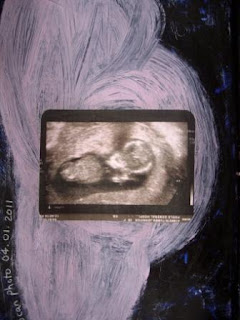 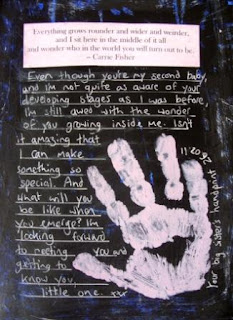 Then at the end of March it was my dad's birthday, and we also sent cards to my mum for mother's day at the beginning of April, so me and my daughter made these (see if you can guess which ones I made!):
For my dad: 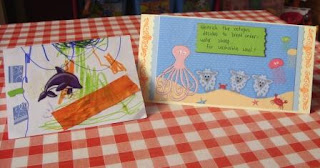 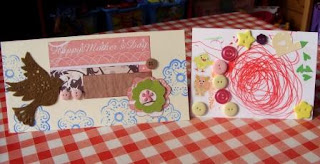 At the beginning of April it was my friend Rosie's birthday, I don't have photos of the cards we made her, but I also made her this bib style necklace. It ended up a bit bigger than I intended because I kept finding more bits and pieces I wanted to add to it (the large buttons and flowers were made by me too): 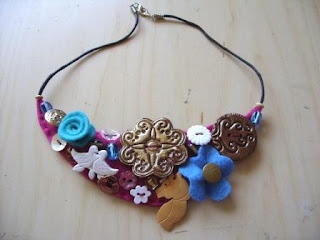 And then, last Friday me and little miss sat down to an afternoon of creating. As it was Earth Day 2011 I set my daughter making this: 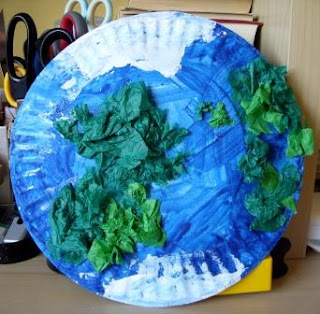 It sort of looks like the world! I know it's not a very accurate depiction but hey, she's three, and it was still useful, as it helped me to talk to her about countries and seas, etc.

While she was making that, and in between me having to wash blue paint off her fingers and glue from her hair, I was making this: 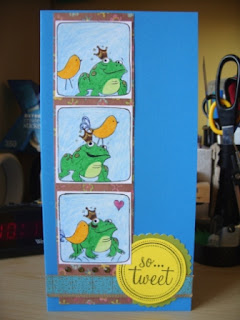 Nothing to do with Earth Day, but it was inspired by something I'd seen a couple of days before on Julie Kirk's blog, about how to use stamps to make a cute photo-booth strip. You can see her post about it here, or the tutorial on how to make one is here on the 'it's a creative world' blog, so check them out - Julie's examples are so sweet and fun!

I don't have a huge array of stamps with characters on, most of my stamps are twirly backgrounds or phrases, but I managed to find this frog and bird, who I think had a little romance going on in the photo-booth! It was fun to make but now I want more cute stamps to create with. I was thinking you could also use the same technique to create a simple comic strip, so I want to try that out too.

That's all for now, but hopefully I'll be back soon with a scrapbook page. Especially now my study is all tidied and organised since it was swapped around with my daughter's room. She keeps telling everyone with pride how she's now got the BIG bedroom. I sulk a little bit at having my stash depleted and squeezed into small spaces, but I know I'm lucky to have a separate room to work in at all, even if it's a small one. Next year I'll probably have to give this one up too, when the new baby (due in July) moves out of our room. Until then I'm going to try and appreciate having my own space! x
Tweet
Pin It
Posted by Unknown at 14:11

Hi. Thanks for letting me know you tried out my photo-booth idea! I *love* your romantic bird + frog - especially the little peck on the cheek in the last one!

You're right - they'd make a fun comic strip idea! Might try that one myself!

You have been busy! Even though you're not scrapbooking, at least you're creating! You won the robot kit on my blog! Congrats! Send your address to meghann.andrew@gmail.com and I'll get it sent across the pond for ya!

Wow, you have been busy even if you haven't been blogging! I bet Rosie really loved that necklace.

Amazing stuff!
I just love the art journal and necklace especially...just a great job.
I love evrything in here, and I´m followe noww.
Have a nice week.
Hugs from Brazil
Cynthia

Thanks for live a nice comments...!!!
Have a wonderful weekend!!!
Hugs from Brazil
Cynthia

Great projects, I like your pregnancy art journal page - the scan looks so cute placed there :)