My January Kit was feeling a bit neglected. I couldn't work out why I didn't want to do any scrapbooking. Then I went looking for a photo to scrapbook, and I realised all the photos in my 'to scrap' box were duplicates of ones I'd already scrapped, or they were shots I'd printed before I knew how to edit properly, so they were too dark or not cropped right. I had about 20 photos left which were true scrapping material! That's not enough to inspire me... so I placed an order for 250 photos from Photobox. Yay, I shall be scrapping like mad when they arrive!

In the meantime, Two Peas in a Bucket has been having an Online Social for CHA winter 2013, when all the manufacturers show off their upcoming products (there's a post to come on my 'picks' of the new releases!). I was really inspired by some of the Two Peas challenges, so I scrapped a couple of those 20 pics which I had left!

Here's the first, a layout for challenge #2, to scraplift 2 concepts from other people's layouts. 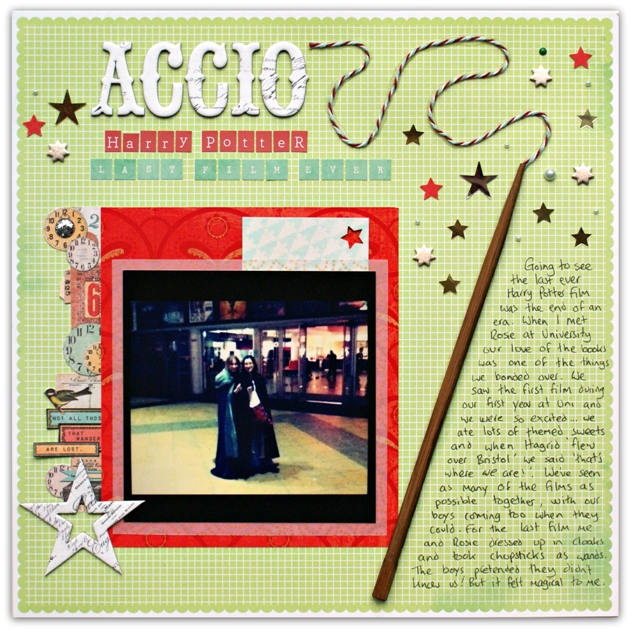 This page is about when I went to see the last Harry Potter movie at the cinema with my friend Rosie. Harry Potter is one of the things we bonded over when we met at Uni, and we saw most of the movies togeher at the cinema, so going to see the last one was like the end of an era! We dressed up in cloaks and took chopsticks for wands, and our husbands were with us but pretended not to know us :-)

The photo is really dark and blurry, which is why it sat in the 'to scrap' pile so long. But it was taken at night on an old I-phone, so I knew no amount of editing would make it any better, I just had to use it. Because no matter how bad the quality of the print is, the memory will make me smile each time I see the photo!

For those of you that don't know, 'Accio' is a summoning spell. I chose the title mainly because it used letters that I had left in my Counterfeit Kit - I'm proud of myself for changing the title instead of breaking open a new set of alphas! 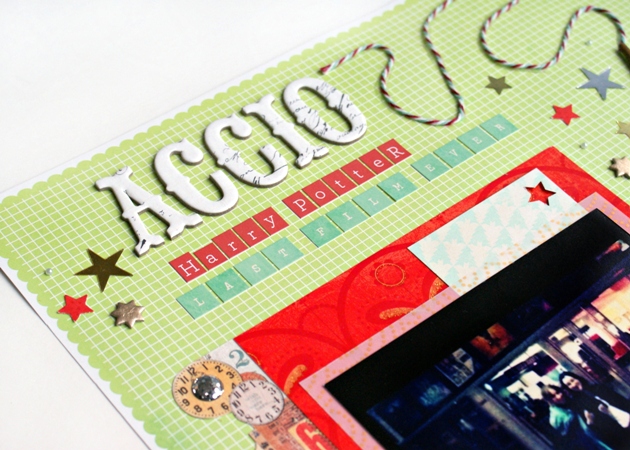 The layout mostly uses my January Counterfeit kit, the only things I added were a chopstick for a wand, and lots of stars! A couple of the stars were punched from papers in my kit though. I just wanted lots of stars to make it look super magical! The free-from-the-chinese-restaurant chopstick that I used was originally really light in colour, but that didn't look wand-like enough, so I coated it a couple of times with a brown ink pad: 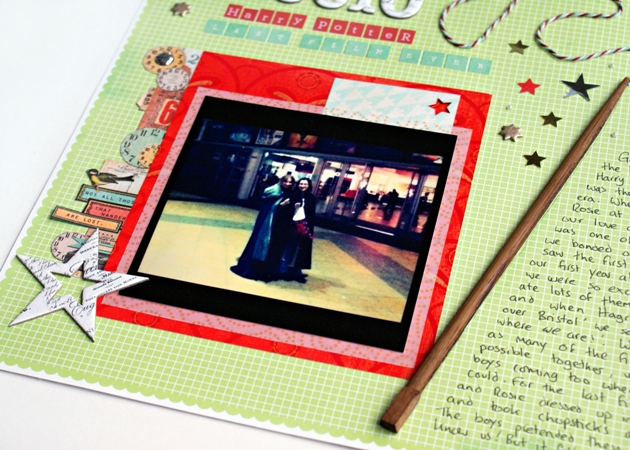 And the two concepts that I scraplifted were
1: A twirly twine look by Emily Pitts for Sassafrass HERE,
2: Using lots of sequin stars by Corrie Jones HERE: 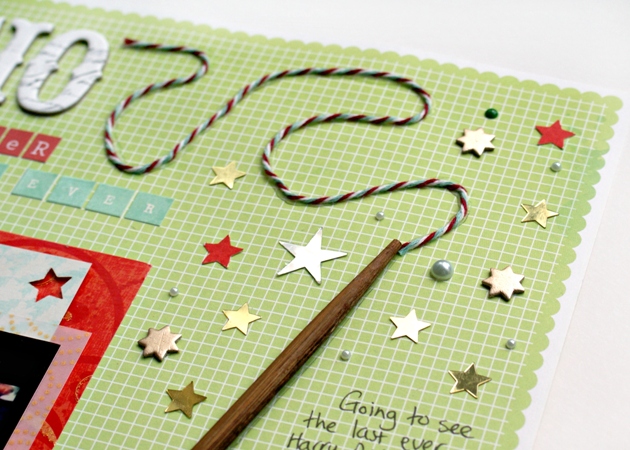 What do you think - is it magical enough?

The next layout was for challenge #8, to use 8 different materials on your page. 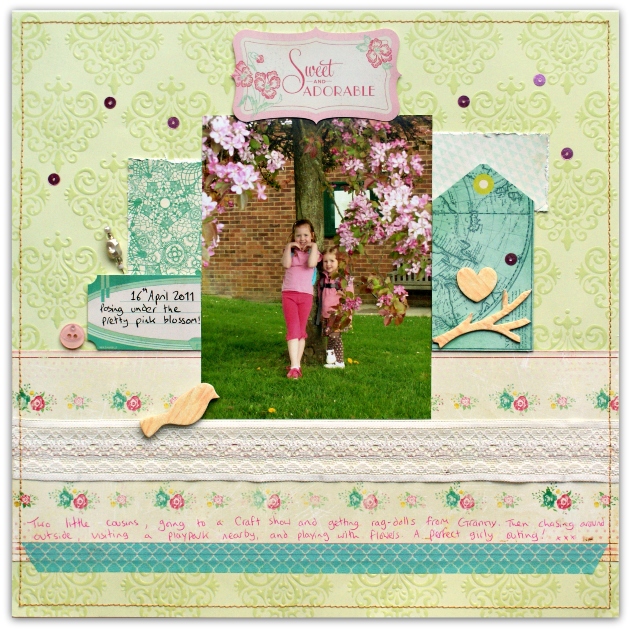 For my 8 materials I used:
1. Patterned Paper (I'm counting the tag for this too as it was cut from a PP sheet)
2. Lace
3. Chipboard pieces painted to look like wood
4. Stickers
5. Sequins
6. A Beaded Pin
7. A Button
8. Washi Tape

Everything on this layout is from my January Counterfeit Kit.

The pearly pin worked well for the cute, girly page, as did the pink sequins pulled off my sequin trim: 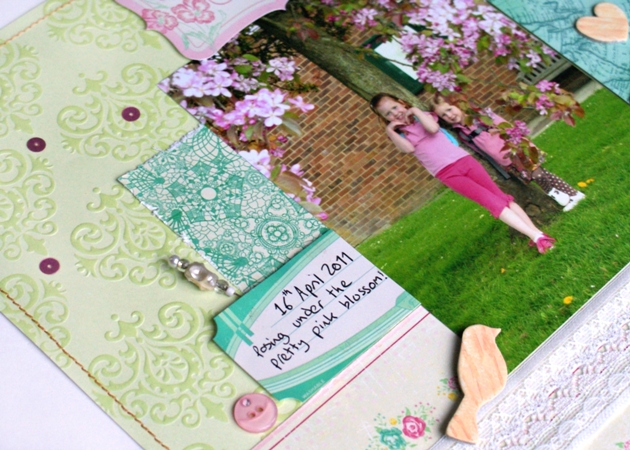 And what a perfect page to use my DIY wood embellishment branch on! 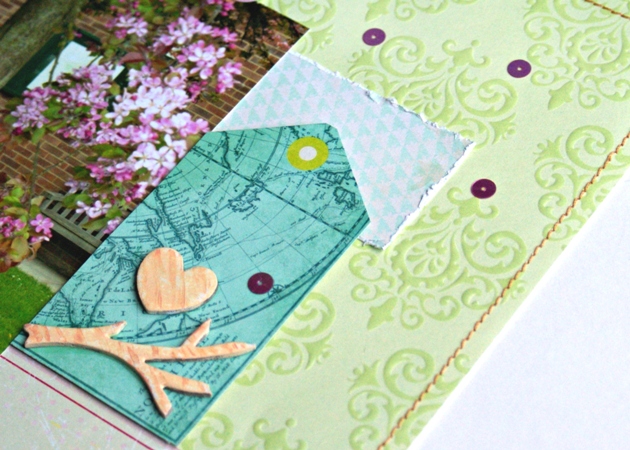 There's not so much of a story to this photo, it was just a lovely day watching my daughter run around with her cousin, and collecting flowers. Those two are so cute together and we don't get to see them often enough!

My kit is looking nicely dented now, but there's still plenty left for when my new photo prints turn up any day now. Happy Scrapping! x

I really love your Harry Potter page....all the brightness counteracts the dark photo.....and the 'embellishments' all down the side look great.

your HP layout is brilliant Jennifer. The use of a chopstick for a wand and the twine works so well....love it x

both great layouts, Jennifer.
But love that Harry Potter page with the twine and wand.
So creative :)

WOW! Really love that top page! It astounds me how you can use so many items and still have a very clean feel to the page. FABULOUS!

Love them-especially the Harry Potter page! It's been fun chatting with you on the 2Peas CHA board-wish we could get together for a real live crop!

I know what you mean about having photos to inspire you, have just place an order for 335 photos!

I lve these layouts. I love how you journaled on the first one, along the angle of the wand.

Fab layouts - I totally adore the first one! :)

I have lots of photos waiting to be scrapped, but now that I'm better able to get at my craft supplies I've gotten really busy again and have no time to use them.... *sigh!*

Great layouts, love the wand on the Harry Potter page :)

lets see where to start? Love the HP love-I'm a HP addict! That chopstick and the journaling are awesome! And love everything about the "8" page:)

Wonderful pages, especially love the Harry Potter one. So creative to use the chopstick like that!!

Great stuff! What I especially love about the HP one is the way the design makes plenty of space for the journaling - that's magic! sorry, couldn't resist..

Beautiful layouts today!!!! I have been working and haven't had time to play with the challenges at 2P's this time...lucky you!!!

Love the bakers twine and all the little embellies along the left in the first one, and what's not to love about birds (in the second one)?
Rinda

That first page is quite simply magic!!! Love the back-story too!

That HP layout is awesome! I remember crying way too much during the last movie, definitely was the end of an era for me (though i watch to bluray pretty often ^^)

Rebecca at How I Burb said...

I love the wand and twine! So stinkin cute!!

Both great pages but love all the details down the edge of the HP layout! Hope you're keeping nice and warm! Sarah x

Your Harry Potter page is so very clever! I love your magic wand ... Wish I could magic pages like this into being!

I loved the story behind your HP page! Both pages are gorgeous!

Both stunners. Love how much journalling you managed to squeeze onto the Harry Potter layout and the second layout is just so full of pretty details. Blissful!