Last Saturday I took part in a live art event at the Lighthouse, Poole, as part of Poole Literary Festival. The event was called The Bookshelf, as artists were given a 30cm stack of books to recycle into art (books donated kindly by Oxfam), and our publicity material was displayed on a bookshelf. Each artist was situated on a plinth which was 1m square, and raised slightly off the floor. I was working with Rosie, who is my close friend and my business partner (for those of you who don't know, we run creative writing workshops, mainly for kids. Our website is http://www.creativecreatures.moonfruit.com/): 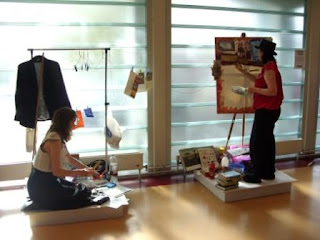 We were the only team in the event -  there were eight other individual artists taking part. Because we were a team, and on seperate plinths, we came up with some fun ways to pass things to each other, including a bucket on the end of a pole, and a rope system to pass book pages. Also, we weren't allowed to put things on the floor during the three hours that we were working, but as we were a team we were allowed to use books as stepping stones a couple of times so that we could change plinths! 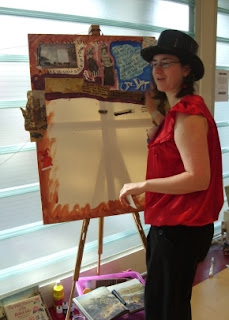 We were creating a story on canvas. Other artists were working on various projects, like paper trees and canvas art. We dressed up for the occasion as we wanted to look fun and approachable. Rosie was wearing a ball gown, and a waistcoat I made for her from a Jacqueline Wilson book: 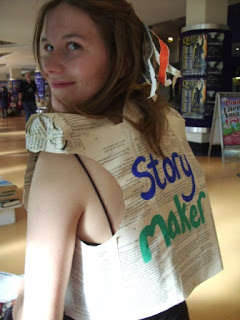 The reason we wanted to look approachable was because we were using public interaction to make our story. We asked public to help us choose images, words and characters from the books we were given. We had people from age 2 to approx age 80 giving us suggestions for plot twists, highlighting words on pages, and choosing character names. Some even helped with a bit of tea-staining / marbling / painting: 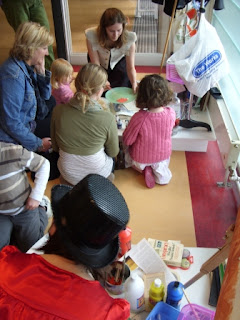 The story was quite bizarre but also really fun. The main characters were two ladies called Joanna and Elizabeth (picture and names chosen by some young girls). These characters usually have a quiet life, but one day, whilst partaking in their favourite hobby of drinking tea, their tea suddenly starts slurping them! They are transported to another world, where they meet a spider-costumed man named Mr. Clattercup who has a bubble blowing (not fire breathing) dragon in his home. The dragon turns out to be dangerous and the girls run from him and end up at a castle (meeting various other characters along the way), and the final line of the story is 'an elephant skidded into the ballroom' -  a sentence taken from one of the books we had! 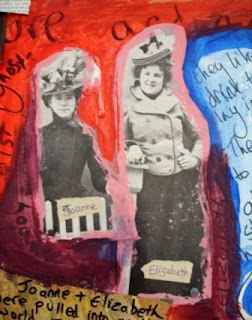 Barely any of the story was chosen by us, we might have tweaked the wording here and there but all the plots, characters and a lot of the words were chosen by the public. Even my little girl came along and helped choose some images for illustration: 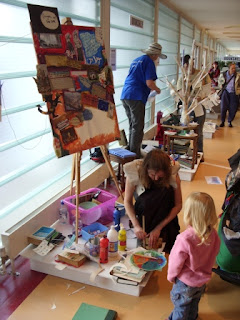 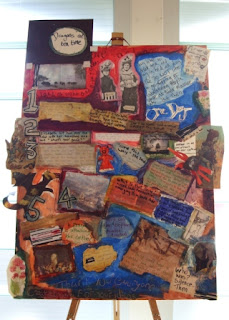 The title of the story is 'Dragons at tea time'. We managed to tear this fantastic front cover off one of the books - it had a picture of cowboys in the oval so we covered it up with the title: 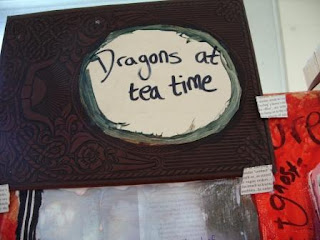 And here's me in the jacket I'd decorated for the event, but then couldn't wear for too long as it was so hot in there! 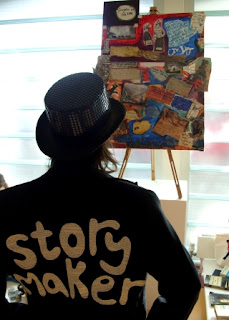 Our canvas is now on display in the Lighthouse gallery until the end of November. We need to go back this week and make sure nothing has fallen off!


It was great fun to take part in the event. We're hoping it will have made a few more people aware of us. Our photo was in the local newspaper today, we were the only artists from the Bookshelf event with a photo in there so that was quite exciting!

I have a lot of other photos from the weekend to share, as I also spent the rest of the weekend at a hen party, and on Saturday night we went out in 'child of the 80's' costume. Then on sunday night when I got home we had Rosie and her fiancee round for a dinner and as it was halloween we wore spooky costumes (well, the girls did!). I want to show you the pic of my little girl in her witch costume! How many costumes can I fit into one weekend eh?! I'll hopefully post those other pics tomorrow!

It looks like you had so much fun Jen and I love the beautiful creation :)

Wow, I would love to have seen you in action! What an amazing event (and a great bit of publicity for you too :) ) Weren't you absolutely exhausted by the end of it?

Brilliant!! looks like you both had lots of fun.

How wonderful! Such energy in these photos and in your account of the day ... The costumes look great, and must have attracted lots of attention! 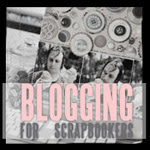 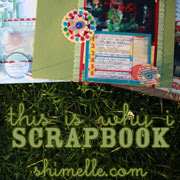